What I should be doing

Those kittehs think they're so smart. Let me see them try the elliptical machine.
Posted by four legs good at 4:46 PM 5 comments:

and Ripley becomes pop-art worth of Warhol.
Posted by four legs good at 3:32 PM 8 comments: 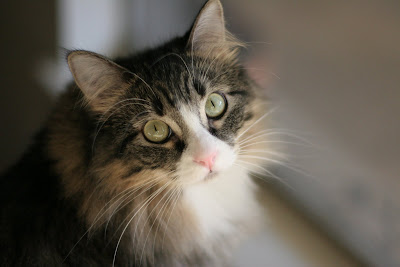 I LURVES mah Ripley too.

This photo is high resolution as well. EEEEEEP!!
Posted by four legs good at 8:14 PM 8 comments: 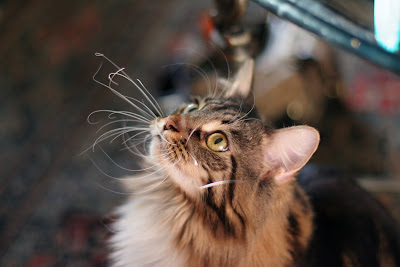 I freaking LURVE this cat. She cracks me up.

High res photo/ click on the photo and drown in teh eeepiness.
Posted by four legs good at 7:48 PM 10 comments: 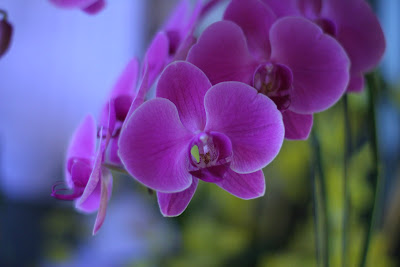 I haz a new lens.

(the orchid on my desk next to my monitor that is still alive and blooming. iz a miracle!!)
Posted by four legs good at 7:35 PM 3 comments: 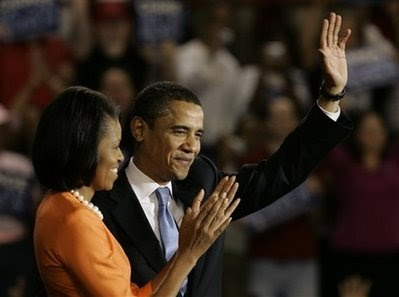 As for my rant yesterday, I guess I should now say....

Well, actually it's not over yet. Well, it is over, but Clinton still doesn't know it's over. Or isn't admitting it's over. (Frankly, I thought she sounded like a crazee person tonight, but that's just me.) So the farce will continue on for a few days, but I'm fairly confident now that Clinton's opportunity to steal this thing is gone.

For once it looks like the good guys are going to win one.
Posted by four legs good at 1:18 AM 9 comments: 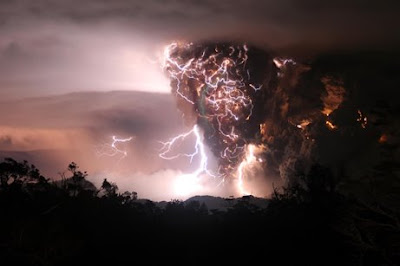 Since the volcano awoke on May 2, it has continued erupting intermittently, blanketing the area in ash and forcing more than 4,000 people to flee.

The mingling of lightning and ash seen above may be a "dirty thunderstorm."

The little-understood storms may be sparked when rock fragments, ash, and ice particles in the plume collide to produce static charges—just as ice particles collide to create charge in regular thunderstorms.

What an unbelievable photograph. Simply stunning.

Photograph by Carlos Gutierrez/UPI/Landov
Posted by four legs good at 12:48 AM 3 comments:

They're hoping I'll be in a better mood nao.

Thanks for bearing with my rant earlier.
Posted by four legs good at 9:05 PM 3 comments: 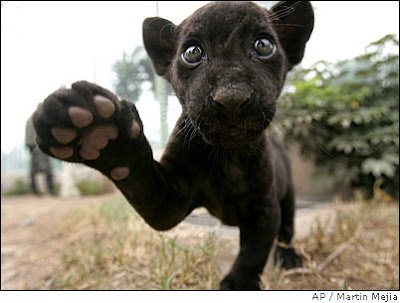 hat tip to GWPDA
Posted by four legs good at 8:21 PM No comments: 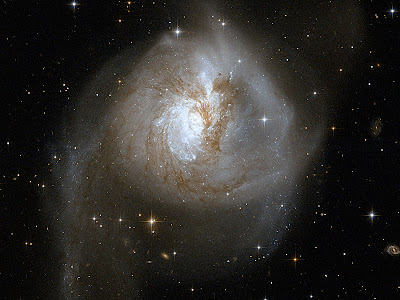 Explanation: Galaxies don't normally look like this. NGC 3256 actually shows a current picture of two galaxies that are slowly colliding. Quite possibly, in hundreds of millions of years, only one galaxy will remain. Today, however, NGC 3256 shows intricate filaments of dark dust, unusual tidal tails of stars, and a peculiar center that contains two distinct nuclei. Although it is likely that no stars in the two galaxies will directly collide, the gas, dust, and ambient magnetic fields do interact directly. NGC 3256, part of the vast Hydra-Centaurus supercluster of galaxies, spans over 100 thousand light-years across and is located about 100 million light-years away.

(I suppose U guys want kittehs, eh?)
Posted by four legs good at 5:38 PM No comments:

The Ghost of Vince Foster is Howling 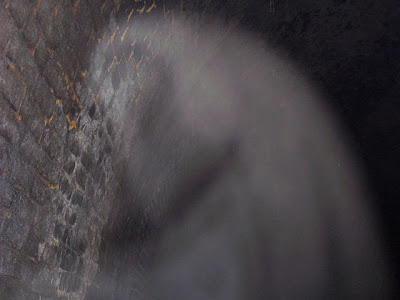 As a Brit who's just moved to Vancouver I've always slightly favored the Clintons and never quite understood the antipathy towards Hillary that exists in America. But last night's speech was the most depressing I have ever seen. Filled with pandering to the fear of the outsider, and no sign of vision, charity or even humanity. She now seems so morally crippled by the desire for power that it's actually uncomfortable to watch.

If the Clintons somehow manage to win the nomination this way, it will be one of the most depressing political moments in recent history. Even taking into account Bush-Kerry.

You could say that when I'm reduced to quoting, and agreeing with, Andrew Sullivan, that the election has officially driven me yompy.

It won't come as a surprise to long-time readers that I am supporting Obama in the primaries. My reasons are complex, but that's a topic for another post. The short version is that I think he's a brilliant young politician who takes thoughtful and reasoned policy positions who has inspired a broad coalition of voters, many of them young or new voters, to stand for change in this country. He has inspired millions to be invested in the political process, to feel that they have a stake, that real change is possible, and that we can take back our country.

I don't think anyone in their right mind can seriously argue that Washington DC isn't badly broken. At the moment, we the people do not reign. Hell, we don't even have a seat at the table. Special interests rule the day, writing legislation and influencing policy to a sickening degree. The corporatists have a firm grasp over both parties. Americans have overwhelmingly said that the country is on the wrong fucking track.

And yet on the eve of the North Carolina and Indiana contests, I believe there is a very real possibility that Senator Clinton, the candidate of the old-boy democratic network, backed by the establishment democratic machine, might just steal this thing from Obama.

How the hell did we get here?

I watched Obama's rally from a VFW hall in Indianapolis tonight and while he sounds just as passionate, just as committed, I sensed a note of demoralization. And fuck? why not. Just last week Peter Drier reported that long-time Clinton loyalist Sidney Blumenthal has been using the entire right wing apparatus to swift boat Obama with the most scurrilous of garbage.

Almost every day over the past six months, I have been the recipient of an email that attacks Obama's character, political views, electability, and real or manufactured associations. The original source of many of these hit pieces are virulent and sometimes extreme right-wing websites, bloggers, and publications. But they aren't being emailed out from some fringe right-wing group that somehow managed to get my email address. Instead, it is Sidney Blumenthal who, on a regular basis, methodically dispatches these email mudballs to an influential list of opinion shapers -- including journalists, former Clinton administration officials, academics, policy entrepreneurs, and think tankers -- in what is an obvious attempt to create an echo chamber that reverberates among talk shows, columnists, and Democratic Party funders and activists. One of the recipients of the Blumenthal email blast, himself a Clinton supporter, forwards the material to me and perhaps to others.

This has been going on four six months, months before Hillary unleashed her "kitchen sink" strategy in public.

How can this possibly stand?

Clinton cannot win honestly. She's been out of the game since February. She picked up a nail back during Obama's 10-0 run, and she doesn't even know she's dead. And yet, cheered on by the right wing and, god help me, the increasingly unhinged feminist contingent, she gets worse by the day.

Oh, she's not that bad, you say. Really? Don't take my word for it, listen to the Weekly Standard: "She is acting like one of our own."

She's running a right-wing campaign. She's running the classic Republican race against her opponent, running on toughness and use-of-force issues, the campaign that the elder George Bush ran against Michael Dukakis, that the younger George Bush waged in 2000 and then again against John Kerry, and that Ronald Reagan--"The Bear in the Forest"--ran against Jimmy Carter and Walter F. Mondale. And she's doing it with much the same symbols.

I don't think it matters to her how much personal damage she does to Barack Obama. So what if she permanently labels him a "latte drinking, elitist, pansy liberal" for all time? Winning is everything.

Clinton has repeatedly said that she believes that she is the best candidate. I think that means that she's justified doing what ever it takes to win.

There's just one problem- what she believes doesn't matter. What matters is the judgement of the voters. And we've spoken.No amount of trash the Clintons throw will change that. The math is the math.

I am personally offended by the entire stinking mess. What the hell do we stand for? Who are we as democrats? I left the republican party in my 20's because I believed that the democratic party was the party of fair play and equal opportunity. We tell african americans and latinos and the poor in this country that if you work hard and play by the rules, why, you can achieve anything!

But god help us, it's not true. These days I wonder, "was Nader right? are we just as in thrall to the corporations and special interests as the republicans? Are we just as much a party of insiders and big money fat-cats?" I think the answer is "yes." What I'm watching is the inside faction of the democratic party systematically destroy the most promising young politician of our generation. And press is not only a willing bystander, they're aiding and abetting.

No matter what happens tomorrow, Hillary's minions will be out in force with their insidious spin, shouting, "He's UNELECTABLE!! he's too different! too green!! we'll all die!! the superdelegates must go with Hillary!!" And the political press will dutifully report, "well, there are SOME doubts about Obama!"

Really? Are we really going to tell the black community that the first viable african american in American history must give up the nomination to a privileged, multimillionaire, white candidate? That the guy who played by the rules, outworked everyone else, and ran the most brilliant campaign in a century can't have it? No one in their right mind thinks that Clinton would still be remotely viable without her "scorched earth" campaign. And after that do you really think they're going to cowboy up and support Clinton?

Think again. They'll walk in droves. And I'll be walking with them. This is a deal breaker for me.

At some point you have to stand for something. As Omar (from the Wire) would say, "a man's gotta have a code."

My code does not include ruining the reputation and career of an honorable and decent public servant. And I won't be a party to it. I'm sorry, but I am sick at heart and I'm grieving for the promise of this country that I see slipping away.

You all will have to decide where your line in the sand is. I believe I've found mine.

Oh, you're probably wondering, "what the hell is the title of the post about?" Okay, no, I don't believe Hillary killed Vince Foster. But I do think it's incredibly ironic that one of Hillary and Bill's oldest friends, suffering from clinical depression, killed himself in despair over the Washington culture of personal destruction, lamenting in his suicide note:

In a just world that 3:00 am phone call to Hillary would be from Vince Foster. And the voice she'd hear through the receiver would be Vince howling in outrage and despair.
Posted by four legs good at 12:18 AM 24 comments: 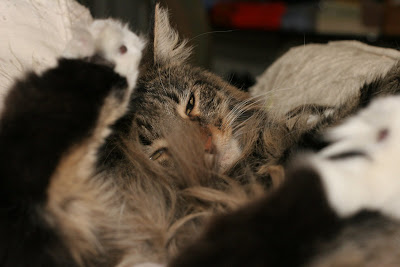 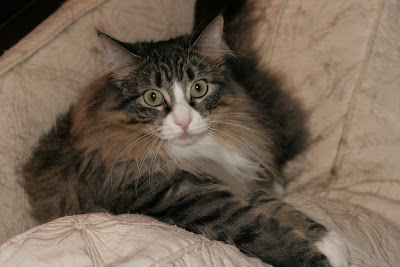 Just another plushy day in teh four legs household. High res photos for UR eeeeepy pleasure.
Posted by four legs good at 2:02 AM 4 comments: