Many of the harsh interrogation techniques repudiated by the Pentagon on Wednesday would be made lawful by legislation put forward the same day by the Bush administration. And the courts would be forbidden from intervening.

In June, in Hamdan v. Rumsfeld, the Supreme Court ruled that a provision of the Geneva Conventions concerning the humane treatment of prisoners applied to all aspects of the conflict with Al Qaeda. The new bill would keep the courts from that kind of meddling, Professor Yoo said.

“There is a rejection of what the court did in Hamdan,” he said, “which is to try to judicially enforce the Geneva Conventions, which no court had ever tried to do before.”

Gee, I dunno, maybe that's because no american administration has ever tried to establish the practice of torturing prisoners as official state policy. The Geneva Conventions aren't just some quaint, archaic ideal to strive for, american law prohibits torture.

These are terrible, evil people.
Posted by four legs good at 11:59 PM 6 comments:

Three plushy posts in one day, oh my!! 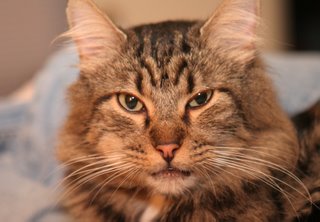 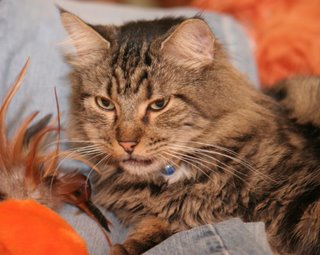 Mr. Plushy had a check up at the vet this morning. The good news is that he's gained a pound. The bad news is that his mouth is still infected. He'll be on drugs for the next month at least.
Posted by four legs good at 6:32 PM 13 comments: