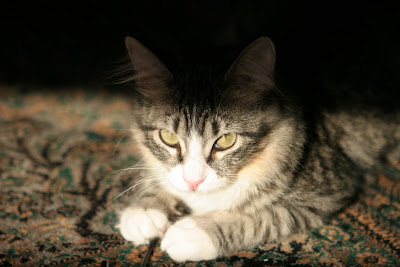 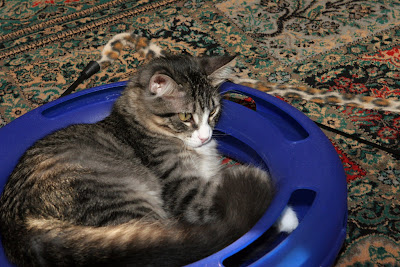 Don't worry, Ripley gets plenty of attention. She makes sure of it.
Posted by four legs good at 4:50 PM 8 comments: 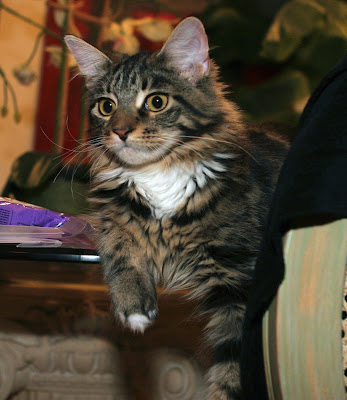 She's getting quite plushy. 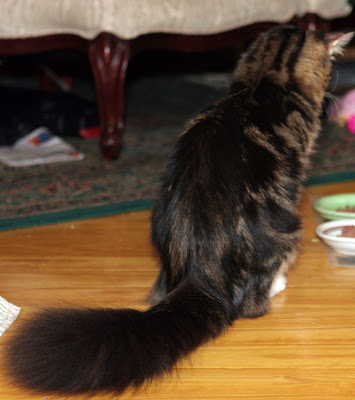 And the tail of doom, which everyone wants to see more of.
Posted by four legs good at 10:48 AM 19 comments: 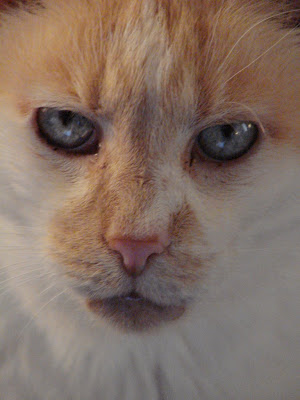 Terribly sad news. Long time reader Poopyman had to say goodbye to his beloved friend Nicky this past week.

Nicky died from lymphosarcoma, the same terrible cancer that took my wonderful boy Zachary in 2002. Rest in peace, Nicky. But not too much peace, go frolic among the stars with lion kitty Maxx.
Posted by four legs good at 10:43 AM 9 comments:

Due to travel and other issues, we haven't had Mr. Plushy blogging for the past couple of fridays. So here's a double shot.

Just hanging out and being adorable. 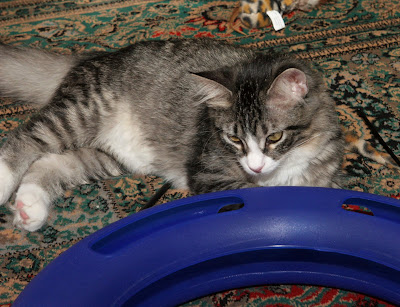 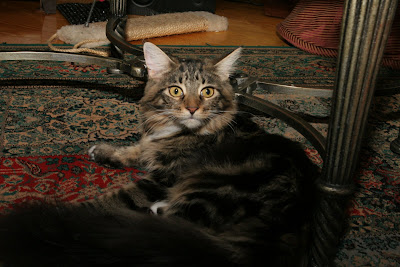 The world's fluffiest tail. So fluffy it's almost impossible to get into the camera frame.
Posted by four legs good at 10:09 PM 4 comments:

And yet MORE photoblogging

These are chandaliers in the lobby of a building downtown near the world trade center site. The whole ceiling was covered with what must have been dozens of them.

And a closeup of one. They looked a little like fireworks explosions.

Eli got all nervous because he thought the security guard was going to chase me out. He knew better than to mess with a centaur.

No guts no glory. Sometimes no glory anyway.
Posted by four legs good at 5:40 PM 8 comments:

Rahm Emanuel to Dick Cheney, "Get out of the White House you fucking radioactive brain eating zombie. Oh, and give us back our money."

Kudos to Rahm, who I usually want to kick in the ass, for getting right to the point.
Posted by four legs good at 4:06 PM 1 comment: 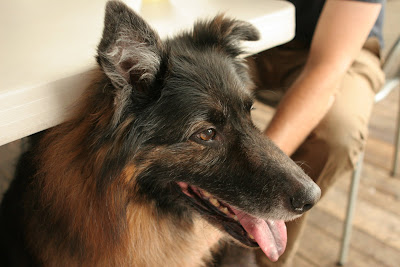 This is Conan, who owns one of our graduate students. Conan attended a shower for one of our colleagues last night and was a delightful addition to the party.
Posted by four legs good at 1:33 PM 4 comments: 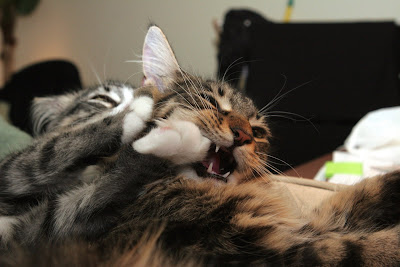 "Quit biting me, you little brat!!" 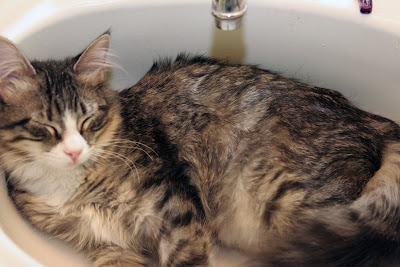 The talented Miss Ripley finds a sink to snooze in.
Posted by four legs good at 11:37 AM 7 comments:

These pretty much suck. The two top photos were taken from the train as we were leaving, through a dirty subway car window.

I think this view shows just how seedy the entire Coney Island district is. A developer has been buying up the land and wants to develop it, but the locals are resisting, saying they want to preserve "historic" Coney Island. Honestly, I don't know what's there to preserve. It's incredibly run down and depressing.

On the other hand, the people who were there seemed to be having a ball. I tried to get a nice motion blur here, but didn't slow the shutter down enough. Oh well.

Hopefully they'll strike a happy medium and renovate the area, while preserving some of the local flavor and keeping it affordable enough for people to still go there. I'll probably never go back, because Atroland in closing at the end of the summer, and even if it wasn't, there aren't any freaks left there.
Posted by four legs good at 10:43 PM 3 comments: 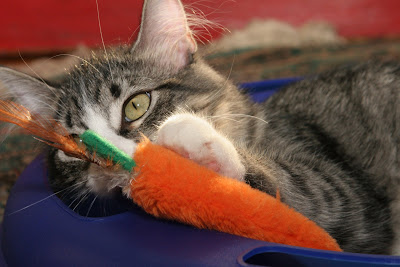 Ack! The return of the psychotic alien carrot of DOOM!!!

Luckily for all of you, the talented Miss Ripley can subdue the carrot AND do her physics homework without even ruffling her fur.

Scary bird totum guy who wants to peck your eyeballs out.

Scary demon who wants to eat your children while you're at Coney Island.

Scary totem that made us think of Ntodd with no customers at the Tastee Freeze. We were so frightened we ran out of the gallery screaming.
Posted by four legs good at 4:01 PM 2 comments: 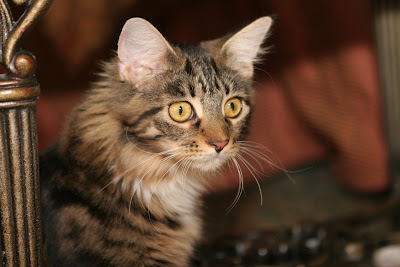 Maddie's got the snidely-whiplash thingee going on. 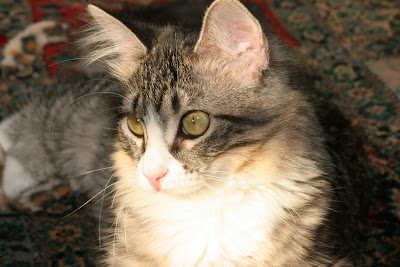 And Ripley was just happy that I came home and played with her.
Posted by four legs good at 10:42 AM 3 comments: 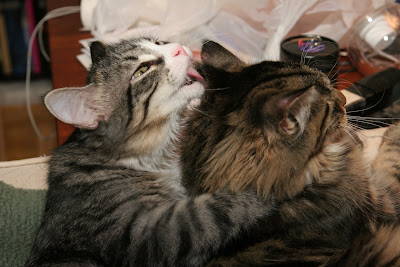 Ha! Ripley caught in the act, grooming her sister. 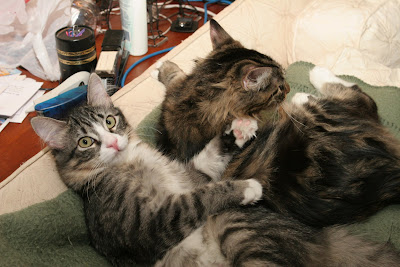 And that's your eeeeeeeep fix for tonight.
Posted by four legs good at 11:21 PM 5 comments:

Bloomberg sez to the rethuglican party... 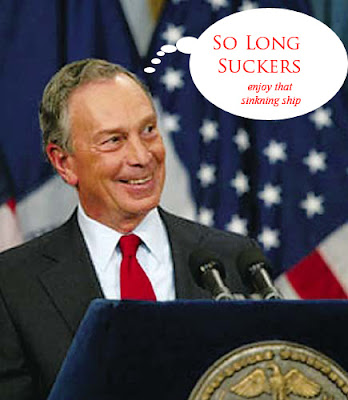 "Hey rats!! You ain't getting none of my billions for the general election... and not only that, but I'm gonna crash your party!!"

I'd correct that by saying, he ain't gonna leave, he's already out the door. Interestingly enough, Tweety is apparently not terribly impressed by Bloomberg's cologne. He's all a-twitter about Bloomberg's monkey wrench in his manly hero's plans.

The bottom one is BIG and scary. Mostly I'm posting these pictures to tweak Eli about him camera since mine is better at shooting in low light situations.
Posted by four legs good at 4:55 PM 2 comments:

Tired of photoblogging yet?

A close up of an amethyst geode in the minerals and gem gallery.
Posted by four legs good at 2:27 PM 5 comments: 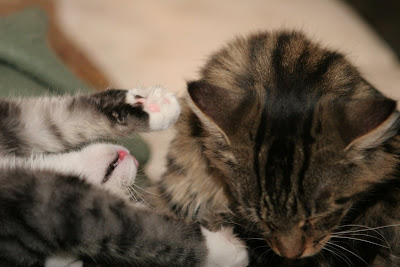 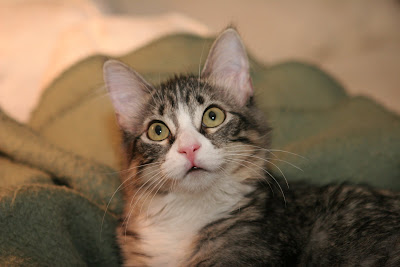 Poor Ripley, she was all depressed when I left for work this morning.

We're going to have to have a serious play session tonight.
Posted by four legs good at 9:48 AM 5 comments:

Wanker of the Year

This is not an entirely trivial matter since government officials should not lie to grand juries, but neither should they be called to account for practicing the dark art of politics. As with sex or real estate, it is often best to keep the lights off.

You have got to be kidding me. A high government official engages in a smear campaign that destroys the career of a CIA agent? And Cohen thinks he should walk? Thinks it's perfectly acceptable to use their office to attack career government employees in the name of "the dark art of politics"??

I dunno, maybe I'm crazy but I think high public officials ought to be held to the highest standards, not the lowest.

And I think that over-the-hill pundits who can't see that should give serious thought to retiring and letting someone who can think write a column for the WAPO.

Here's the link in case you need your bloodpressure jacked up. Why Scooter Shouldn't Do Time by a wankiferous old bastard with shit for brains.
Posted by four legs good at 11:15 PM 2 comments:

After a long day of torturing their centaur, the kittens indulge in a snuggle session. 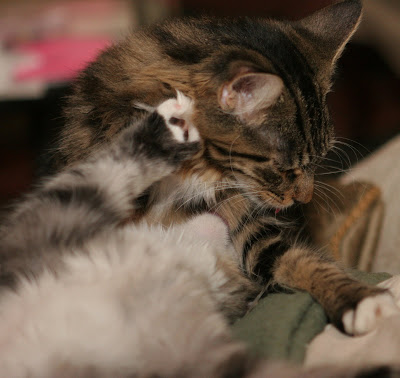 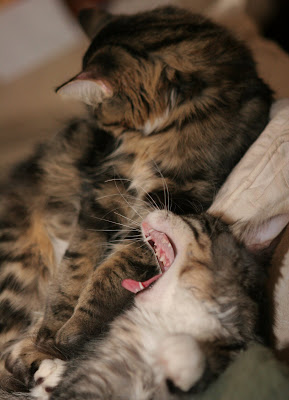 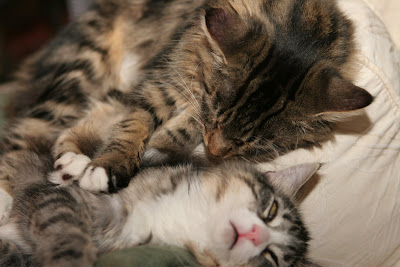 He looks like he wants to fuck up a republican or two.
Posted by four legs good at 9:38 PM 3 comments:

I originally took these in color, but the sky is all grey and cloudy so I changed them to black and white. They still kind of suck. I really don't do objects so well.

This is the big ferris wheel.

...and the world famous Cyclone.
Posted by four legs good at 8:51 PM No comments: 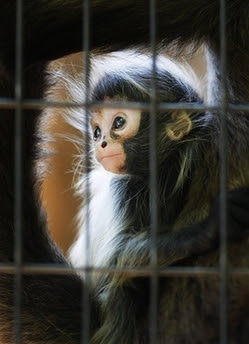 No, I did not take this photograph, though the Central Park Zoo has a baby spider monkey of their own.

More photos from the American Museum of Natural History

From the Evolution of Man gallery, they have a lovely reproduction of some of the amazing cave paintings from Lascaux, France.

This is a close up detail of a mask in the gallery that displays indian art from the northwest tribes. I'm not sure what this one is all about, though it makes me think of brain eating zombies.

Another mask- this one had a face inside a face.
Posted by four legs good at 3:17 PM 5 comments: 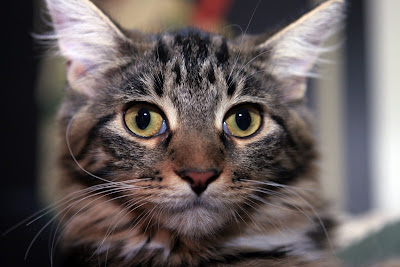 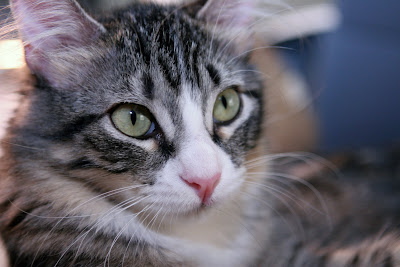 Don't let those innocent faces fool you. They are scamps. Both of them.
Posted by four legs good at 10:17 AM 23 comments:

I'll have more to say on this subject later (when I'm not so busy), but the day we went to Coney Island was Puerto Rican day in NYC. The amusement park was full of young puerto rican men and couples, all enjoying the day and the rides, and sporting red, white and blue to honor their heritage.

I caught a few of them on the bumper cars.
Posted by four legs good at 10:03 AM 3 comments: 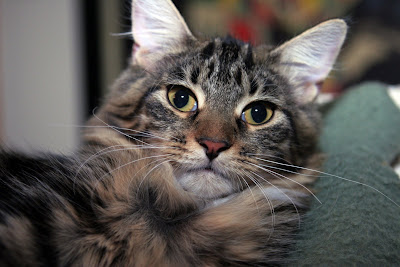 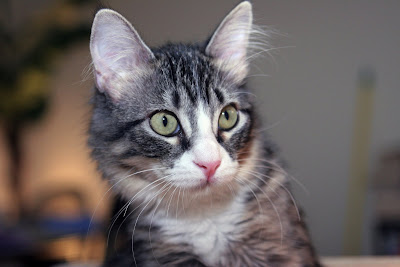 As you can see the girls are quite chipper this evening.
Posted by four legs good at 10:38 PM 5 comments:

In a series of interviews early this year, the first he has given, Taguba told me that he understood when he began the inquiry that it could damage his career; early on, a senior general in Iraq had pointed out to him that the abused detainees were “only Iraqis.” Even so, he was not prepared for the greeting he received when he was finally ushered in.
“Here . . . comes . . . that famous General Taguba—of the Taguba report!” Rumsfeld declared, in a mocking voice. The meeting was attended by Paul Wolfowitz, Rumsfeld’s deputy; Stephen Cambone, the Under-Secretary of Defense for Intelligence; General Richard Myers, chairman of the Joint Chiefs of Staff (J.C.S.); and General Peter Schoomaker, the Army chief of staff, along with Craddock and other officials. Taguba, describing the moment nearly three years later, said, sadly, “I thought they wanted to know. I assumed they wanted to know. I was ignorant of the setting.”

It's a recurring pattern with the Bushies. They never want the truth to come out, and if it does, they just shrug and say, "What are ya gonna do about it?"

Then they turn and around and either shoot or destroy the career of the messenger.

Taguba got a different message, however, from other officers, among them General John Abizaid, then the head of Central Command. A few weeks after his report became public, Taguba, who was still in Kuwait, was in the back seat of a Mercedes sedan with Abizaid. Abizaid’s driver and his interpreter, who also served as a bodyguard, were in front. Abizaid turned to Taguba and issued a quiet warning: “You and your report will be investigated.”

“I wasn’t angry about what he said but disappointed that he would say that to me,” Taguba said. “I’d been in the Army thirty-two years by then, and it was the first time that I thought I was in the Mafia.”

I hate these people with the heat of a thousand suns. They have no honor. None. Every single one of them should be driven from public service.

And the earth should be salted behind them.
Posted by four legs good at 8:27 PM 5 comments: 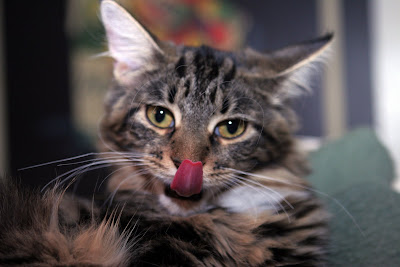 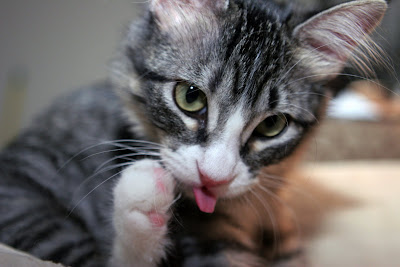 A common thread. The two of them were being really annoying today- refusing to sit still and strike cute poses for me. They do have nice pink tongues, so I suppose I'll forgive them.
Posted by four legs good at 8:11 PM 6 comments: