The NYTimes is reporting a US army unit abused and tortured prisoners both before and after Abu Graib.

As the Iraqi insurgency intensified in early 2004, an elite Special Operations forces unit converted one of Saddam Hussein's former military bases near Baghdad into a top-secret detention center. There, American soldiers made one of the former Iraqi government's torture chambers into their own interrogation cell. They named it the Black Room.

In the windowless, jet-black garage-size room, some soldiers beat prisoners with rifle butts, yelled and spit in their faces and, in a nearby area, used detainees for target practice in a game of jailer paintball. Their intention was to extract information to help hunt down Iraq's most-wanted terrorist, Abu Musab al-Zarqawi, according to Defense Department personnel who served with the unit or were briefed on its operations.

The Black Room was part of a temporary detention site at Camp Nama, the secret headquarters of a shadowy military unit known as Task Force 6-26. Located at Baghdad International Airport, the camp was the first stop for many insurgents on their way to the Abu Ghraib prison a few miles away.

Placards posted by soldiers at the detention area advised, "NO BLOOD, NO FOUL." The slogan, as one Defense Department official explained, reflected an adage adopted by Task Force 6-26: "If you don't make them bleed, they can't prosecute for it." According to Pentagon specialists who worked with the unit, prisoners at Camp Nama often disappeared into a detention black hole, barred from access to lawyers or relatives, and confined for weeks without charges. "The reality is, there were no rules there," another Pentagon official said.

No blood, no foul. You know what that reminds me of? the scene in the Grifters where the hood has filled a bag with oranges to beat Angelica Houston with. Because it doesn't leave marks.

God. When did we turn into such an unbelievably brutal society? Stories like this make me think that America isn't worth saving. It makes me think that we've stepped so far over the line that we are indistinguishable from the brutal regimes that we profess to hate.

"The reality is, there were no rules there." Think about that quote. The reality is, this administration doesn't care about the rule of law, domestic or international, and has dispensed with common decency.

So what will tomorrow bring? Cue the wingnuttians moaning and rending their hair over "the enemies of america who endanger our safety by revealing the abuse." And cue the justice department initiating yet another investigation to find out who let the cat out of the bag.
Posted by four legs good at 10:50 PM 2 comments:

Maxx is wondering why there isn't a decent sci-fi movie on tonight.
Posted by four legs good at 7:48 PM 3 comments:

The NYTimes is reporting that Bush has been thwarted in his bid to gut the clean air laws.Judges Overturn Bush Bid to Ease Pollution Rules

WASHINGTON, March 17 — A federal appeals court on Friday overturned a clean-air regulation issued by the Bush administration that would have let many power plants, refineries and factories avoid installing costly new pollution controls to help offset any increased emissions caused by repairs and replacements of equipment.

Ruling in favor of a coalition of states and environmental advocacy groups, the United States Court of Appeals for the District of Columbia Circuit said the "plain language" of the law required a stricter approach. The court has primary jurisdiction in challenges to federal regulations.

Thank god. The administration doesn't understand that all pollution is local. It doesn't matter to me if the aggregate level of air pollution in the country decreases if the plant in my town is still making the air that I breathe toxic.
Posted by four legs good at 11:14 PM 1 comment:

Congratulations to NYMary and Thersites- Sean Patrick was born this afternoon at 4:52 EST. A St. Patrick's Day baby!! woo hoo!!

Lion kitty Maxx would like to offer his giant plush peep as a baby gift.
Posted by four legs good at 4:37 PM 5 comments: 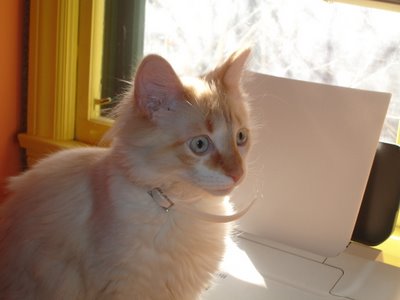 This is Vicki's adorable kitty Cosmo. He thinks Bush is the Worst. President. Ever. 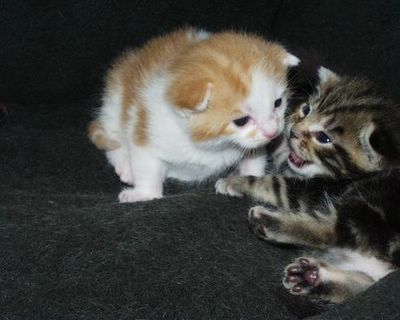 Eli has hit on the perfect illustration of the dynamic between the two major political parties in America today. 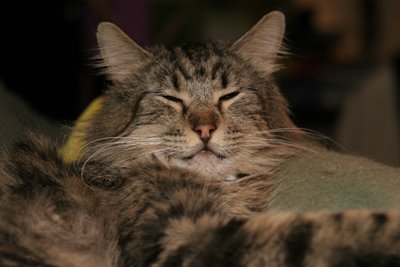 Maxx hangs out on his blankie, waiting for a pretty atriette to drop by and coo over him.
Posted by four legs good at 5:36 PM 14 comments: 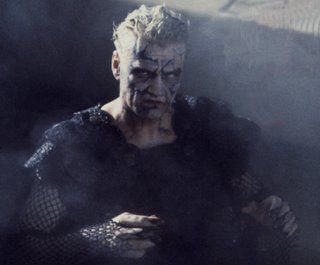 Froomkin comments on chimpy's reaffirmation of the "bush doctrine" which apparently has risen from the ashes of the failure in Iraq to menace the world once again.

This morning's news that President Bush is reasserting his doctrine of preemptive war is a bit of a surprise because, well, I think most people thought the Bush Doctrine was dead.

How can Bush still argue for attacking another country based on his suspicions about their intentions -- when the first time he tried it, his public case turned out to be so utterly specious?

The idea that the American public or the international community would tolerate such behavior once again seems highly unlikely at this point in time. The American people, for one, won't be keen on putting troops in harm's way again on spec anytime soon.

The good news is that we don't have the troops or resources to be pre-empting anyone else anytime soon. The bad news is chimpy and his merry band of idiots have never let a few facts get in the way of their disatrous decisions.

Horrid ideas are like the undead with this administration. Nothing seems to kill them. They just resurface in new and virulent forms when karl thinks the coast is clear.

This is what happens when the country elects a narcissistic nitwit who surrounds himself with asslickers and lunatics. Worst. President. Ever. 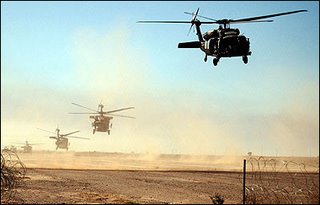 The US has launched the largest series of air attacks since 2003 in Samara, north of Baghdad. Many of you weren't around during the Vietnam war, but the more things went south, the more tonnage we dropped on Vietnam.

It didn't help, and I doubt this will either.
Posted by four legs good at 4:22 PM No comments: 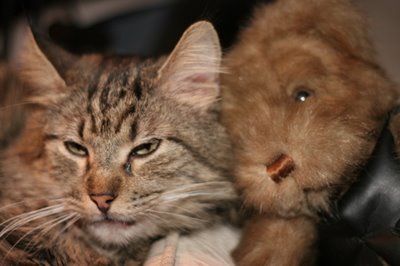 Maxx hanging out with Teddy.
Posted by four legs good at 10:25 AM 2 comments: 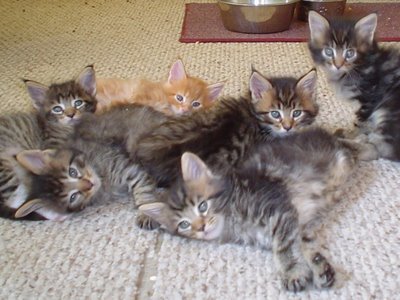 4 legs is really, really tired this week. But not too tired to give ya some anonymous baby plush.
Posted by four legs good at 11:03 PM 7 comments: 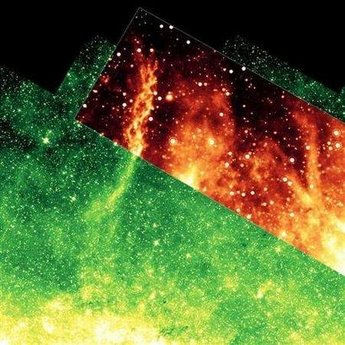 Magnetic forces at the center of the galaxy have twisted a nebula into the shape of DNA, a new study reveals.

The double helix shape is commonly seen inside living organisms, but this is the first time it has been observed in the cosmos.

"Nobody has ever seen anything like that before in the cosmic realm," said the study's lead author Mark Morris of UCLA. "Most nebulae are either spiral galaxies full of stars or formless amorphous conglomerations of dust and gas—space weather. What we see indicates a high degree of order."

These observations, made with NASA's Spitzer Space Telescope, are detailed in the March 16 issue of the journal Nature.

Hat tip to Ruth for the heads up.
Posted by four legs good at 3:16 PM 1 comment: 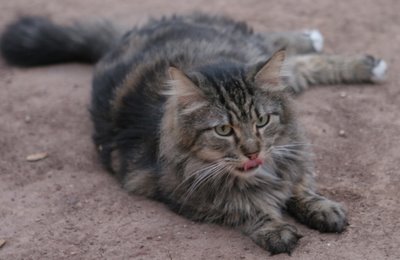 Here's Maxx hanging out in the middle of my swimming pool. Feh.
Posted by four legs good at 2:58 PM 3 comments:

A little on the sleepy side.
Posted by four legs good at 3:19 PM 4 comments: 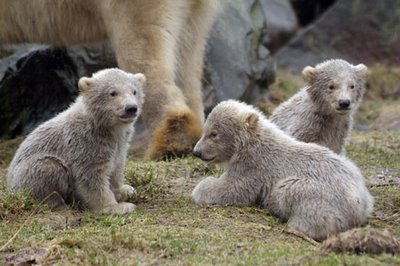 Polar bear triplets!! "The three cubs pictured above are believed to be the first set of polar bear triplets born in captivity. The trio made their public debut last Friday at the Ouwehands Zoo in the Netherlands ." Via National Geographic News.
Posted by four legs good at 3:16 PM No comments: 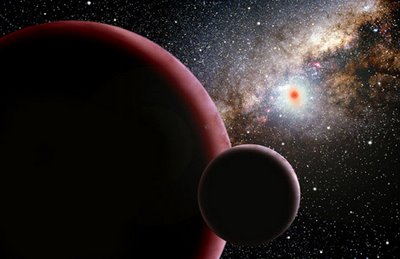 Scientists have discovered a new planet they call a "super-Earth" in a solar system 9,000 light-years away.

The icy, rocky planet, which weighs 13 times as much as Earth, orbits the outer region of its solar system, around a so-called red dwarf star that is about half as big as our sun.

The planet dominates a region similar to the one in our solar system that is populated by the gas giants Jupiter and Saturn. Scientists believe the planet likely didn't accumulate enough gas to grow to giant proportions.

Gee. It would take republicans at least a few centuries to trash a planet that big.
Posted by four legs good at 10:22 PM 2 comments:

A plethora of monday plushy. Just cause he's so fucking cute.
Posted by four legs good at 9:32 PM 2 comments: 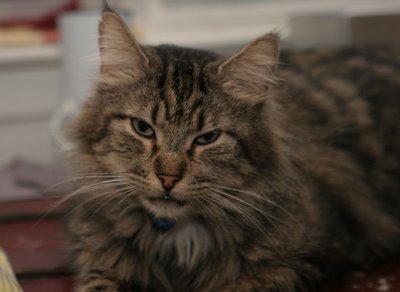 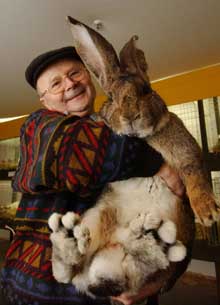 Via Athenae at First Draft. Our Bunny Overlords. 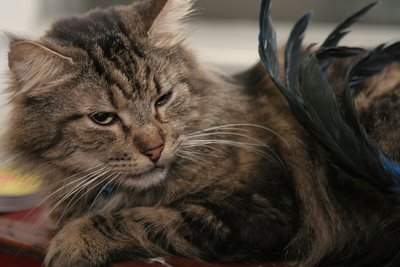 Maxx wants to know why his toys are attacking him. "Get that thing off me!"
Posted by four legs good at 9:40 AM 5 comments: