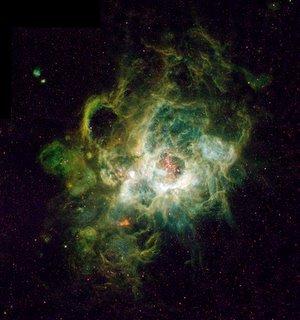 Scientists are beginning to understand the properties about the strange stuff of the universe known as "dark matter." Via BBC, Dark Matter Comes Out of the Cold

Last Updated: Sunday, 5 February 2006, 23:25 GMT
Astronomers have for the first time put some real numbers on the physical characteristics of dark matter.

This strange material that dominates the Universe but which is invisible to current telescope technology is one of the great enigmas of modern science.

That it exists is one of the few things on which researchers have been certain.

But now an Institute of Astronomy, Cambridge, team has at last been able to place limits on how it is packed in space and measure its "temperature".

What's fascinating is that scientists believe that instead of being cold, as current theory suggests, dark matter probably is at least 10,000 degrees, but still doesn't radiate. And bricks! space bricks of 1000 light years across! who knew god had been so busy these past 6,000 years?

(ed. note- the above picture is of the Triangular Nebula and has nothing whatsoever to do with dark matter. It is pretty though)
Posted by four legs good at 2:20 PM