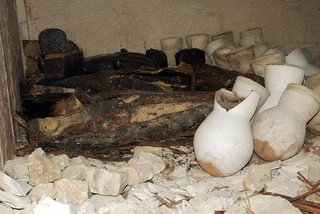 LUXOR, Egypt (AP)—Through a partially opened underground door, Egyptian authorities gave a peek Friday into the first new tomb uncovered in the Valley of the Kings since that of King Tutankhamun in 1922. U.S. archaeologists said they discovered the tomb by accident while working on a nearby site.

Still unknown is whose mummies are in the five wooden sarcophagi with painted funeral masks, surrounded by alabaster jars inside the undecorated single-chamber tomb.

I loves me some mummies. I wonder if the 42 foot one knows about this?
Posted by four legs good at 5:13 PM

Oh, oh. Do we have to worry about mummies coming to life now?