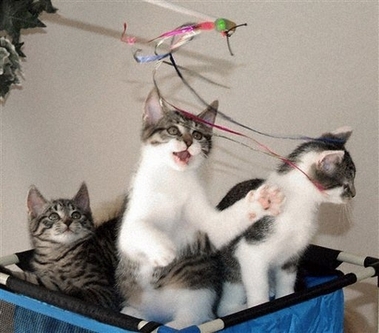 These little cuties were born in September to the world's first cloned cat. Photographed at Texas A&M on Wednesday, Dec. 13th.
Posted by four legs good at 4:38 PM 6 comments: 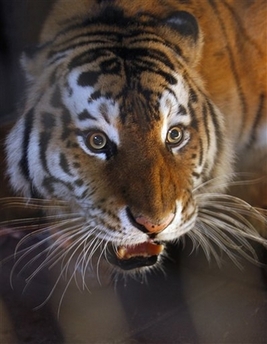 Oh my, this tiger looks like he'd like to eat someone. He lives in the zoo in Bucharest.
Posted by four legs good at 4:36 PM 3 comments: 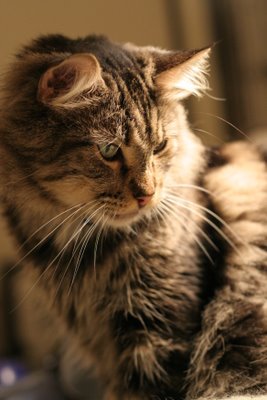 Maxx seems to be feeling a little better this morning. He's back to sleeping in the closet (just right inside the door, not really hiding or anything), but he did come out this morning to have some breakfast and to hang out with me in the bathroom while I got ready for work.

When I left for work he was snoozing on his back, legs in the air, stoned.
Posted by four legs good at 10:00 AM 8 comments: 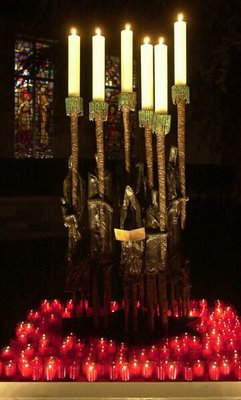 A very happy Hannukah to watertiger, Ex-senator Macaca and all our other jewish friends.
Posted by four legs good at 5:29 PM 2 comments: 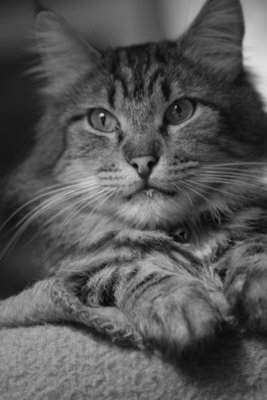 Last night was not so great for the plushter, but this morning he woke up and was grooming his glorious fur coat. He also had cleaned all three of his plates overnight. I'm hoping he'll be feeling better by the time I get home this evening.
Posted by four legs good at 5:08 PM 8 comments: 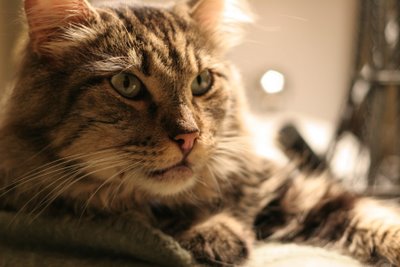 Lion kitty Maxx is very cuddly these days. Must be the drugs. Little tramp.
Posted by four legs good at 5:04 PM 10 comments:

Josh at TalkingPointsMemo notes that Jeff Greenfield says that his little monologue about Obama's sartorial preferences being reminiscent of Iranian President Mahmoud Ahmadinejad was just a little joke and that we bloggers are just too sensitive!!

Sorry. I'm not buying it. I've been watching the Washington Press corps go off the deep end on nonsense for the past 8 years. At this point I know way more about what labels Nancy Pelosi wears than I'd like to.

When the press starts making the same comments about republicans, Jeff will be off the hook. Irony may be dad, fuckers, but the cocktail weinie eaters of the world need a serious attitude adjustment.
Posted by four legs good at 10:49 AM No comments: 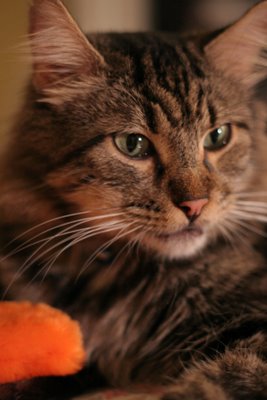 Here he is in happier days, before he began to look like he has a permanent case of the mumps. He's still eating well - yesterday he polished off 4 packages of Whiskas and a can of Fancy Feast White Meat Chicken Florentine. Ooo la la!!
Posted by four legs good at 3:13 PM 6 comments:

I'll admit that I'm a cynic, but I see no good coming of this: Foreign Service Hiring Gets A Re-Exam

For generations, the United States has selected its diplomats through a two-stage test seen as a model of merit-based rigor. Pass hundreds of questions in a dozen subject areas and a day-long oral grilling by Foreign Service officers, and join the ranks. Fail, and find a different line of work.

No more. In a proposed overhaul of its hiring process slated for next year and to be announced to employees in coming days, the State Department would weigh resumes, references and intangibles such as "team-building skills" in choosing who represents the United States abroad, according to three people involved in the process. The written test would survive, but in a shortened form that would not be treated as the key first hurdle it has been for more than 70 years.

The new approach would cut the hiring process roughly in half, to about six months, to better compete with companies that can offer promising candidates a job on the spot. The number of applicants is expected to decline, but to attract a greater range of experience and skills.

McKinsey acknowledged that the current hiring process is a proven predictor of candidate success. And for Foreign Service officers, the written test is a rite of passage, and source of pride. (my emphasis added)

"The sense that everybody passed this exam is important," said Richard C. Holbrooke, the former U.S. ambassador to the United Nations who brokered the Dayton peace accords, which ended the Bosnian war in 1995. Holbrooke entered the Foreign Service fresh out of Brown University, in 1962.

Holbrooke recalled that in addressing his Foreign Service class, then-Secretary of State Dean Rusk "made a big point of telling us that we had come in on our merit, and neither he nor anyone else could influence the process."

Set against that backdrop, "this looks like a lowering of the standards for entry . . . at a time when their focus ought to be on training diplomats for the real challenges of the 21st century," Holbrooke said.

The Foreign Service has always been the place where you actually did find the best and the brightest- the exam is a bitch, and has always been useful in weeding out the light weights.

But no more. My guess in that Condi and Karen Hughes took a look around the State Department and said, "Oh my!! there just aren't enough of our kind around here. What to do?" Gee, I guess making entrance more dependent on "resumes" and "experience" and "team building skills" will make it easier for wingnuts and other assorted idiots to apply. Trust the bushies to take something that works and break it.

Just one more way the Bush administration is fucking up the country. This issue doesn't get much attention, but the damage that Bush and Co. have done to the professional government services will cause damage we'll be paying for for a generation.

Meanwhile, back in hell 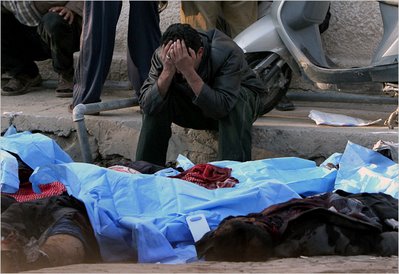 While our talking heads natter on, Iraq continues to be hell on earth for Iraq's citizens. Truck Bombing Kills at Least 56 in Baghdad

BAGHDAD, Dec. 12 — At least 56 people, most of them Shiite laborers looking for work, were killed today when a pickup truck packed with explosives was detonated in a crowded square in the city’s center this morning, Iraqi officials and witnesses said. At least 220 more were wounded.

Also today, a bomb was discovered at the Golden Shrine in Samarra, a holy site for Shiites, the American military reported. A large bomb that was detonated there in February by Al Qaeda severely damaged the shrine and set off waves of sectarian killings and reprisals across the country.

The bomb found today by the Iraqi police went off while it was being removed, causing minor damage to a doorway but no injuries, the military said.

In recent weeks, American military officials have described the battle for control of Baghdad as a steady stream of individual killings of Sunnis carried out by Shiite death squads, punctuated by bombings and larger attacks carried out by Sunni insurgents or Al Qaeda members against Shiites.

Prime Minister Nuri Kamal al-Maliki, a Shiite, denounced the blast as the work of Sunni extremists and “their Saddamist allies.” The speaker of the Iraqi Parliament, Mahmud Mashhadani, a Sunni, also condemned the attack, and called on all armed groups within the country to observe a two-month truce.

The acting director of the hospital, Dr. Flayeh Hassan, said that 53 survivors and 43 dead bodies had been brought to the emergency room there, an influx that presented a challenge to an already struggling institution.

“We suffer a lot because of lack of medical appliances as well as medicine,” Dr. Hassan said. “We suffer from lack of sufficient number of staff to take care of the cases admitted every day. Most of them have left the country.

“We didn’t get our salaries yet, and also the amount which we are supposed to receive from the ministry to enable us to buy supplies from the local market, such as beds and other necessities, hasn’t been received yet.”

Also today, the A.P. announced that one of its cameramen, Aswan Ahmed Luftallah, was shot by insurgents while covering clashes in the northern city of Mosul. He is the third employee of the news agency to be killed in Iraq.

A tally kept by the Committee to Protect Journalists shows that 89 journalists and 37 media support workers had been killed in Iraq since the 2003 invasion, prior to Mr. Luftallah’s death, the news agency said.

I don't know what needs to happen there. We seem powerless to stop the violence and either unable, or unwilling to protect the populace. In truth, this invasion has completely wrecked the country, and there are no good options for fixing the situation. Iraqis are fleeing the country at the rate of 1,000 per day, an astonishing number. Those too poor or unable to leave are dying at a rate of 3,000 per month. That we know of. The death rate could be double that for all we know.

It doesn't help that the administration is more worried about covering their asses than they are about fixing things. At this point I think the only question left is, do you want your bloodbath now? or later?
Posted by four legs good at 10:37 AM No comments: 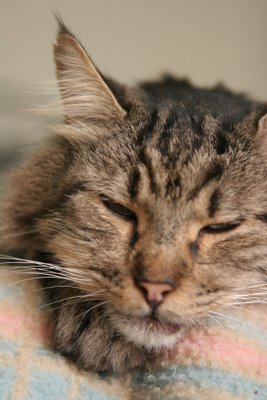 This photo is an old one- but Maxx is fine- he had a better day today. I have a cold again, though I'm sure I'll live.
Posted by four legs good at 11:02 PM 5 comments: 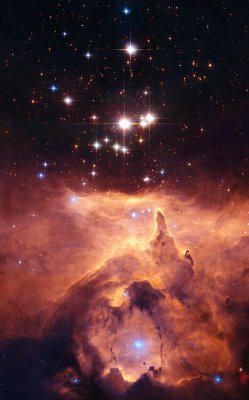 Eli tagged me with a book meme. Bastard.

So here we go:

I'll have to think of some folks to tag in the morning, since I have a terrible headache.

I tag Hecate, Watertiger, and Phila at Bouphonia.
Posted by four legs good at 11:05 PM 4 comments: 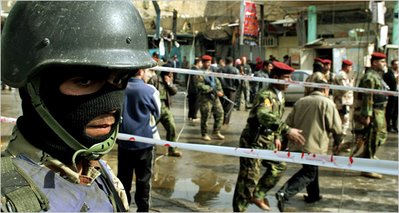 Silly me, but I thought this was the sort of thing we were in Iraq to prevent? Shiites Rout Sunni Families in Mixed Area of Baghdad

BAGHDAD, Dec. 9 — Bands of armed Shiite militiamen stormed through a neighborhood in north-central Baghdad on Saturday, driving hundreds of Sunni Arabs from their homes in what a Sunni colonel in the Iraqi Army described as one of the most flagrant episodes of sectarian warfare yet unleashed in the capital.

The officer, Lt. Col. Abdullah Ramadan al-Jabouri, said that more than 100 Sunni families, many with very young children, had left the Hurriya neighborhood aboard a convoy of trucks and cars under cover of the nightly curfew. Government officials tried to urge the families to return by promising army protection, but could not persuade them.

The role of American troops in the turmoil was unclear. The Sunni cleric, Sayed Muhammad, said appeals for assistance from the First Cavalry Division, its headquarters about three miles southwest of Hurriya, had gone unanswered. But Colonel Jabouri said Iraqi commanders had told the Americans there was no need for their help. A First Cavalry Division spokesman said American advisers with Iraqi troops in Hurriya had reported only one instance of sectarian trouble, when Iraqi troops assisted a Shiite family under threat from Sunnis.(My emphasis added.)

I'm not sure what's going on here- are we ignoring the violence that's happening? Are Iraqi commanders on the ground asking for help but the Shiite commanders from the top not passing the appeals on?

Whatever the answer is, we're not stopping anything. Everyday car bombs go off, more soldiers and civilians die, and our wise men natter on about the politics of the whole thing. It's appalling.
Posted by four legs good at 1:43 PM 3 comments: