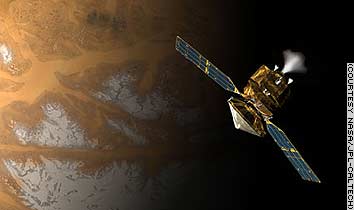 The Mars Orbital Explorer has begun its burn, descending into orbit around Mars. Good luck NASA and JPL!

More updates later, since I loves me some space mission stuff.

update: At 5:16 pm EST NASA received a signal back from the space craft and the control room erupted in cheers. Congratulations to the entire NASA team on a successful orbital insertion.
Posted by four legs good at 4:01 PM 2 comments:

One of my favorite friday things.... 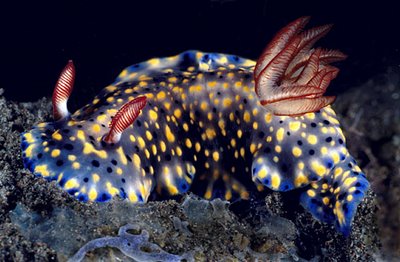 Yes!! friday nudibranch blogging at Bouphonia. This one is hypselobcscura.

All scientifically minded plushyites should make it part of their friday habit too.
Posted by four legs good at 3:48 PM 1 comment: 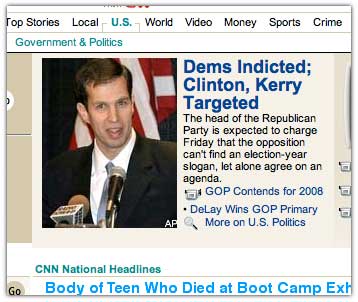 Via Josh at TalkingPointsMemo, we see this unbelievable headline at CNN on Netscape. I agree with Kos. Whoever wrote this headline should be fired.

And then be drop kicked off the fucking planet.
Posted by four legs good at 3:08 PM 1 comment: 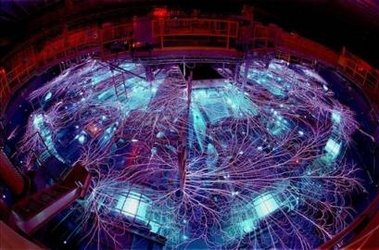 Hey! I gotta get lion kitty one of these!

ALBUQUERQUE, N.M. - A particle accelerator at Sandia National Laboratories has heated a swarm of charged particles to a record 2 billion degrees Kelvin, a temperature beyond that of a star's interior.

"At first, we were disbelieving," said Chris Deeney, head of the project. "We repeated the experiment many times to make sure we had a true result and not an 'Oops'!"

This is a huge, huge deal. The pretty picture is just a bonus.

Incidentally- everytime you see an interesting science story, remember that chimpy and his cohorts don't believe in science and that they've consistently short changed support of basic science in the federal budget. Prayer doesn't get you scientific breakthroughs. Investment dollars do.
Posted by four legs good at 12:00 PM 1 comment: 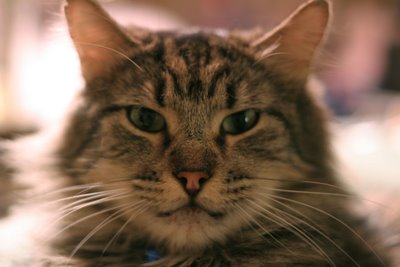 Hoo boy, this is what happens when 4lgs is too lazy to put the flash on the camera and fix the white balance. Better pictures later.
Posted by four legs good at 11:35 AM 7 comments:

chimpy worries about the message.... 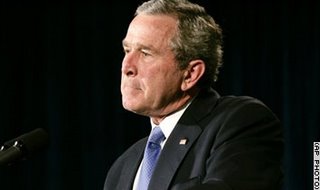 ... that the failed port deal sends. ( I guess that's his "I'm worried and thoughtful look"- sadly, he just looks stupid)

I'm more worried about the message the United States of America has sent the world by having a war mongering, incompetent asshat as our president.
Posted by four legs good at 11:21 AM 20 comments:

Holy shit! about 5 minutes ago Joe Scarborough said, "...I am embarrassed to be a republican." 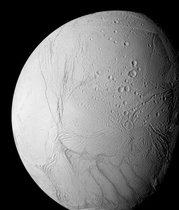 LOS ANGELES - The orbiting Cassini spacecraft has spotted what appear to be water geysers on one of Saturn's icy moons, raising the tantalizing possibility that the celestial object harbors life.

The surprising images from the moon Enceladus represent some of the most dramatic evidence yet that water in liquid form may be present beyond the Earth.

Excited by the discovery, some scientists said Enceladus should be added to the short list of places within the solar system most likely to have extraterrestrial life.

Good to know. We may need a place to run to after Bushco gets through fucking up this planet.
Posted by four legs good at 4:51 PM 2 comments: 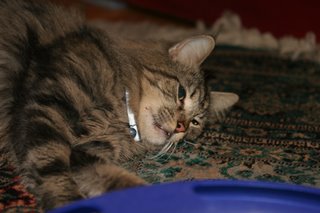 I have to go to class- so here's a jolly picture of lion kitty Maxx playing with his particle accelerator.
Posted by four legs good at 4:17 PM 2 comments: 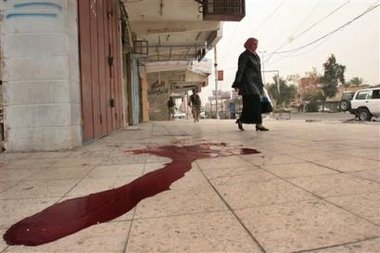 Condi and Rummy were on capital hill today, trying to sell their "ain't no civil war, no sir!" nonsense today. Rumsfeld, Rice Say Iraq Not at Civil War.

Secretary of Defense Donald H. Rumsfeld and Secretary of State Condoleezza Rice said that despite a surge in sectarian violence in Iraq, the process of creating a stable government is proceeding satisfactorily.

Of course. Because having giant pools on blood on the sidewalk of your nation's capital is really freakiing normal.

What universe are these guys living in?
Posted by four legs good at 11:11 AM No comments:

Little ricky sure is a nasty piece of work. Not long after claiming, "who me? I was never part of the K-Street Project," he has quietly resumed, yes, the bi-weekly meetings that are part of the K-street project.

The WAPO has the details: Senator Resumes Lobbyist Huddles

After saying in January that he would end his regular meetings with lobbyists, Sen. Rick Santorum (Pa.), the third-ranking GOP leader in the Senate, has continued to meet with many of the same lobbyists at the same time and on the same day of the week.

Santorum, whose ties to Washington lobbyists have been criticized by his Democratic challenger, suspended his biweekly encounters on Jan. 30. His decision came as Democrats named him as their top target in November's Senate races, and after the guilty plea of former lobbyist Jack Abramoff to charges of conspiring to corrupt public officials.

But in the month since his announcement, Santorum has held two meetings attended by the same core group of lobbyists, and has used the sessions to appeal for campaign aid, according to participants. Both of those meetings were convened at the same time as the previous meetings -- 8:30 a.m. -- on the same day of the week -- Tuesday -- and they lasted for about as long as the earlier meetings -- one hour. (my emphasis added)

I guess being a corrupt little asswipe has become an addiction. Little Ricky has sure got some 'splaining to do.
Posted by four legs good at 12:18 AM No comments:

The boy does love his carrot.
Posted by four legs good at 10:27 PM No comments: 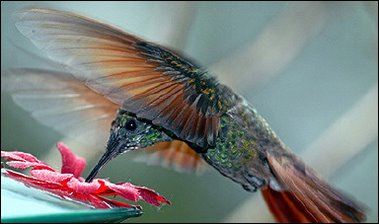 Which makes them way smarter than our preznit. Apparently they can remember the last place they had a tasty meal, proving that birds are much smarter than scientists had previously thought.

I, for one, welcome our buzzy-winged little overlords.
Posted by four legs good at 2:58 PM 3 comments: 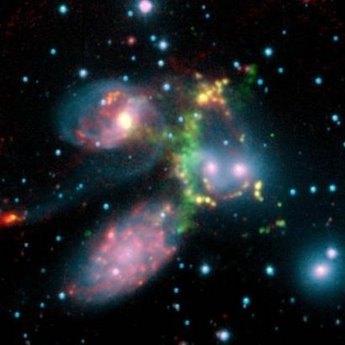 From the Associated Press: In this undated image made available from NASA on Sunday March 5, 2006, which shows the central region of a group of galaxies 300 million light-years away known as Stephan's Quintet. The distant galaxy is generating a 'sonic boom' of cosmic proportions, astronomers have discovered, as one of the galaxies falls towards the others at high speed, ploughing through a cloud of hydrogen gas travelling at 540.6 miles per second - 100 times faster than the speed of sound. The effect of this is similar to the sonic boom created by a fast jet, according to astonomers at the American space agency Nasa, using the Spitzer space telescope, and their findings are to be published later in March, in the Astrophysical Journal.
Posted by four legs good at 2:44 PM 2 comments:

Who are they kidding? Bodies of 23 Men Found in Baghdad

BAGHDAD, March 8 -- The bodies of 23 men who had been strangled or shot were found in two locations in Baghdad Wednesday morning, with 18 discovered aboard an abandoned bus in a predominantly Sunni area of the capital, police and the U.S. military said.

All of the victims on the bus were found with their hands tied by rope, according to an official in the in the Baghdad police operations room who would not be quoted by name. He said 15 of the victims, including the driver of the bus, had been strangled and three had been shot in the back of the head.

All the victims are Sunni, and Sunni leaders allege that the killings, which have become common, are being carried out by Shiite death squads.

So what does our side have to say about conditions in Iraq? On Sunday, the chairman of the joint chiefs of staff, General Pace, had this to say:

"I wouldn't put a great big smiley face on it, but I would say they're going very, very well from everything you look at."

Not surprisingly, not many sane people are buying it. General's Assessment of Iraq Questioned. If this is what "going very, very well" looks like, I'd hate to see his version of "disaster."
Posted by four legs good at 10:28 AM 3 comments: 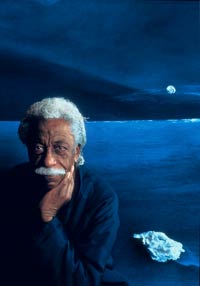 One of the masters of 20th century photography died yesterday at the age of 93. Gordon Parks was the first black person to photograph for Life Magazine and Vogue, and the first to write, direct, and score a Hollywood film, "The Learning Tree."

The WAPO obituary, 'Life' Photographer And 'Shaft' Director Broke Color Barriers, links to a nice photo gallery of some of Parks' work. 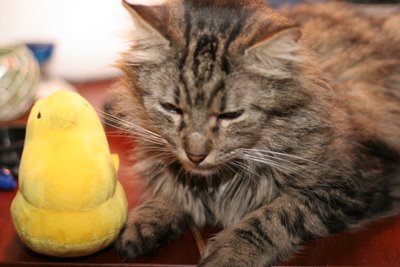 He would really like for me to get that peep out of the house. And stay home more often.
Posted by four legs good at 10:23 PM 3 comments:

From the "of course" file

Tom Delay to spend election night with lobbyists. Ha! You have to love that snarky headline.

You can't make this shit up. Really, you can't.
Posted by four legs good at 10:09 AM No comments: 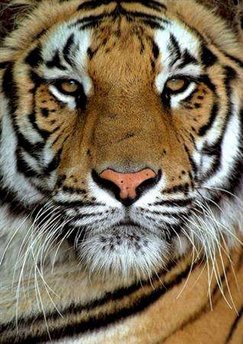 The Dalai Lama has offered a lifeline to the endangered Indian Tiger.

NEW DELHI (Reuters) - The Dalai Lama, Tibet's spiritual leader, has thrown a lifeline to India's dwindling tiger population after an emotional appeal to outlaw the trade in animal skins provoked an extraordinary reaction in his homeland.

All over Tibet, there have been reports of people burning wild animal furs since the Dalai Lama, the Himalayan region's exiled god-king, made his appeal at a Buddhist prayer meeting in southern India in January.

Thousands of Tibetans attended the festival and many carried the Dalai Lama's words back to their Himalayan homeland.

Let's hope that the Dalai Lama's words will help stem the rising incidence of tiger poaching before all of these magnificent creatures are gone.
Posted by four legs good at 9:00 PM 2 comments:

In time for spring 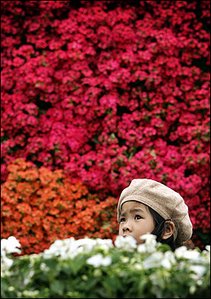 An adorable chinese girl, beautiful floweres... I needed to see a beautiful photo like this today.
Posted by four legs good at 8:56 PM 2 comments:

Sorry, 4lgs has been very busy and apologizes for the lack of plush this past weekend.
Posted by four legs good at 10:49 AM 5 comments:

Sorry, 4lgs has been very busy and apologizes for the lack of plush this past weekend.
Posted by four legs good at 10:49 AM 3 comments:

You must let us talk your children into dying for us...

... or else. The supreme court has upheld a law that requires that US colleges and universities allow military recruiters on campus or forgo millions in federal funds.

The Roberts court at work. Feh.
Posted by four legs good at 9:29 AM No comments: