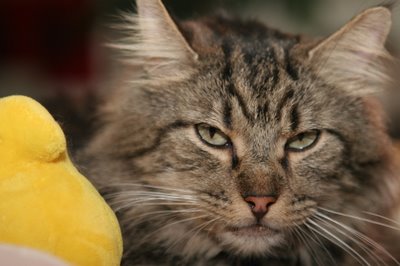 I'm out making pictures... but Maxx and his peep will keep you company.
Posted by four legs good at 2:02 PM 2 comments: 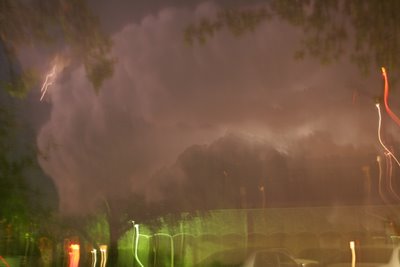 This rather strange photo shows what happens when you take a photo in low light and move the camera. Kind of spooky.
Posted by four legs good at 11:29 PM 4 comments: 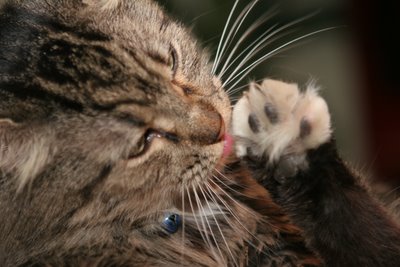 One of my favorite kitty parts- his little white footies.
Posted by four legs good at 9:59 PM 7 comments:

Congratulations! to Nim and Jen 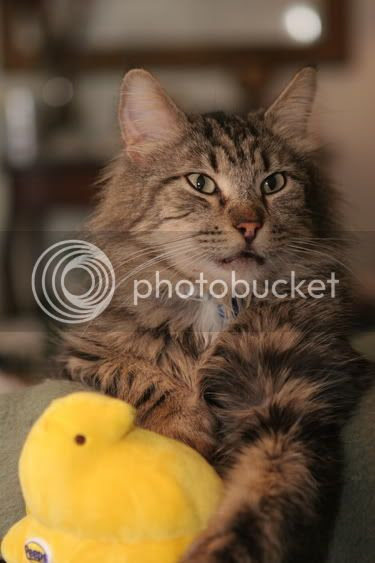 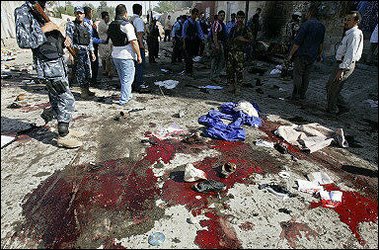 Via the AP, a Mosque Explosion Kills 79 in Iraq.

BAGHDAD, Iraq - Suicide attackers wearing women's robes blew themselves up Friday in a Shiite mosque, killing 79 people and wounding more than 160, police said. It was the deadliest single attack in Iraq this year and the second major bombing of a Shiite target in as many days.

Police Lt. Col. Falah al-Mohammedawi said the blasts were caused by two suicide attackers wearing black abayas at the Buratha mosque, which is affiliated with the Supreme Council for the Islamic Revolution in Iraq, the main Shiite party.

Jalal Eddin al-Sagheer, the preacher at the mosque and one of the country's leading politicians, said there were three assailants. One came through the women's security checkpoint and blew up first, he said. Another raced into the mosque's courtyard while a third came to his office before detonating his bomb, said al-Sagheer, who was not injured.

He accused Sunni politicians and clerics of waging "a campaign of distortions and lies against the Buratha mosque, claiming that it includes Sunni prisoners and mass graves of Sunnis."

Cue the administration nattering on about how "we're fighting 'em there instead of here" and how Iraqis just need to "choose democracy."

The photo is graphic, but then, so is war.

I wish I could paper the oval office with ten thousand color photographs of the death and destruction we've caused. Sadly, I doubt even that would get bush's attention.
Posted by four legs good at 12:50 PM No comments: 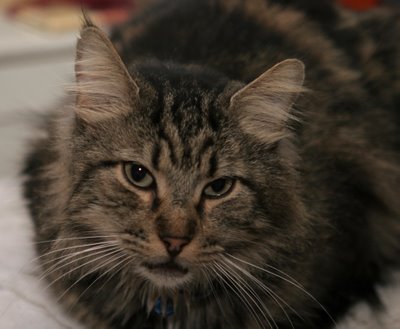 Poor, sweet Mr. Plushy. He's been very sad lately because I'm gone so much. Maybe some pretty atriettes will stop by to coo over him and scritch his chin while I'm working today.

What kind of cult is this? 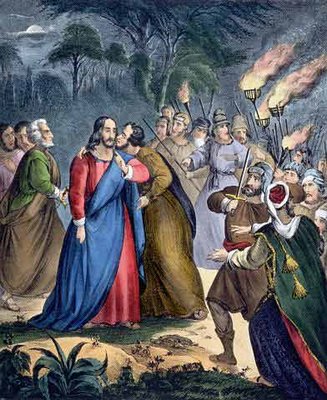 By now you've all heard about this story reported by National Geographic: Lost Gospel Revealed; Says Jesus Asked Judas to Betray Him:

Some biblical scholars are calling the Gospel of Judas the most significant archaeological discovery in 60 years.

The only known surviving copy of the gospel was found in a codex, or ancient book, that dates back to the third or fourth century A.D.

The newly revealed gospel document, written in Coptic script, is believed to be a translation of the original, a Greek text written by an early Christian sect sometime before A.D. 180.

The Bible's New Testament Gospels—Matthew, Mark, Luke, and John—depict Judas Iscariot, one of the Twelve Apostles of Jesus, as a traitor. In biblical accounts Judas gives up Jesus Christ to his opponents, who later crucify the founder of Christianity.

The Gospel of Judas, however, portrays him as acting at Jesus' request.

So what does it all mean? God knows I'm no theologian (I'll cheerfully defer to RMJ and others in that department). It does occur to me though, that christianity can no longer claim to be based on martyrdom. It is clearly a suicide cult.

That sound you hear is the cacophany of christian fundie heads exploding all over the world.
Posted by four legs good at 1:13 AM 1 comment: 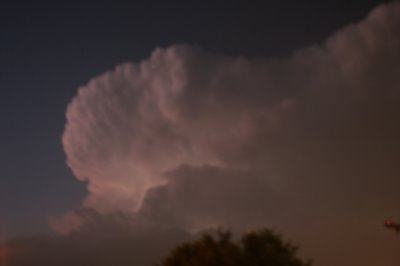 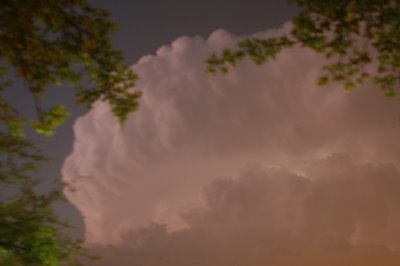 It's spring in central texas, which means thunderstorms and amazing lightning displays. I came out from class this evening to see this amazing cloud that was lighting up almost continually.

This image is a little blurry because I didn't have a tripod handy. That always seems to happen.

Update: since everyone liked the first one so much, I'm putting up the other one.
Posted by four legs good at 9:30 PM 4 comments: 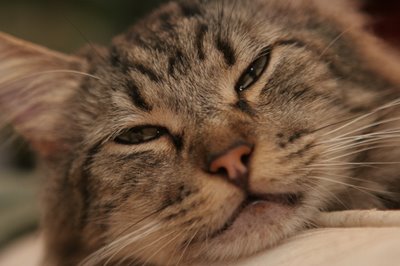 Don't you just want to kiss on that funny little mug?
Posted by four legs good at 11:06 PM 9 comments: 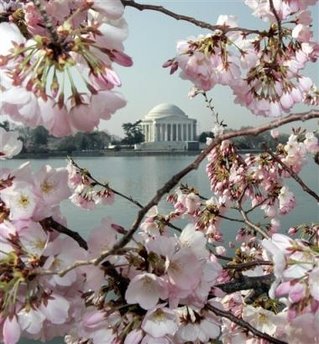 Beautiful.
Posted by four legs good at 10:50 PM No comments:

Missing Link Found (why is it smiling?) 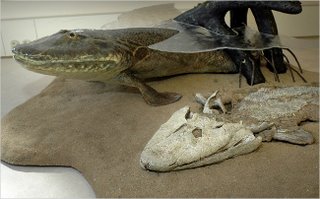 Scientists have found a Fossil Called Missing Link From Sea to Land Animals.

Scientists have discovered fossils of a 375-million-year-old fish, a large scaly creature not seen before, that they say is a long-sought missing link in the evolution of some fishes from water to a life walking on four limbs on land.

A model of the 375 million-year-old fish, which exhibits changes that anticipate the emergence of land animals.
In two reports today in the journal Nature, a team of scientists led by Neil H. Shubin of the University of Chicago say they have uncovered several well-preserved skeletons of the fossil fish in sediments of former streambeds in the Canadian Arctic, 600 miles from the North Pole.

The skeletons have the fins, scales and other attributes of a giant fish, four to nine feet long. But on closer examination, the scientists found telling anatomical traits of a transitional creature, a fish that is still a fish but has changes that anticipate the emergence of land animals — and is thus a predecessor of amphibians, reptiles and dinosaurs, mammals and eventually humans.

Paging all fundie wackadoos!! Please pick up the reality phone!

And don't give me that nonsense about how jesus put the fossil there to "test your faith."
Posted by four legs good at 10:32 PM 1 comment: 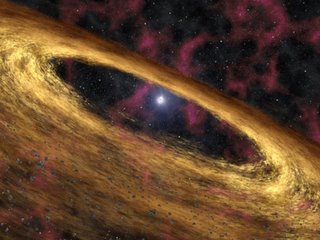 Via National Geographic News, a Planet-Forming Disk has been Spotted Around Dead Star.

A disk of potentially planet-forming debris has been found around a pulsar about 13,000 light-years from Earth, scientists announced today.

The debris is most likely material that has fallen back toward the star after a supernova, or star explosion. The material could clump together to form planets, astronomers say, but such planets would be unlikely to harbor life.

"This disk looks remarkably like those also seen around ordinary young stars in which planets are known to form," said Deepto Chakrabarty, a physics professor at the Massachusetts Institute of Technology in Cambridge, who led the discovery team.

"But for the first time we may be seeing the start of planet formation in the very different, harsh environment that exists around an old dead star like a pulsar," he added.

Cool!! Another place to send the crazy fundies. I'm sure jeebus will provide for them in that hostile environment. And they'll have a pretty sky to look at.
Posted by four legs good at 10:26 PM 1 comment:

What I wish I were doing 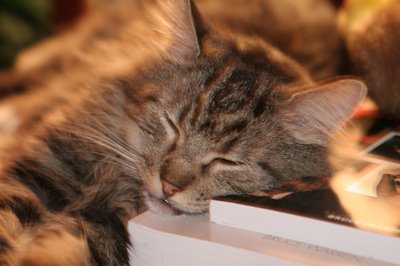 Instead of slaving away at my desk. Ack.
Posted by four legs good at 12:33 PM 10 comments: 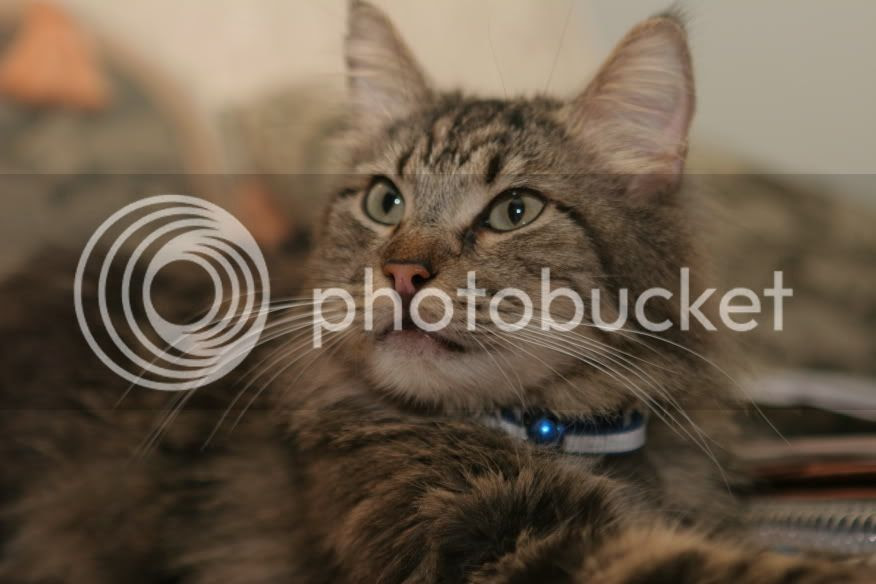 I have to push that evil bastard delay down the page. He is one evil and ugly looking motherfucker, isn't he!

Last night I was musing about how fucking miserable his life was going to be. Sitting in that two bedroom condo. No power. No friends. No prospects.

It never occurred to me that he would try to go the religious route- though I suppose it should have. And the hyper-religious right wing is just crazy enough to swallow that act and reward him richly. Hell, the bugman is demented enough to believe it himself.

I've long been of the opinion that much of what these guys do is rooted in their belief that they're god's chosen, saved ones. The graft, the ill gotten gains, the power? all cause jeebus wanted them to have it. Why, it's their due!!

I'm going to suggest that those fundies open up those bibles they're so fond of and see whether a paunchy, evil, greedy, mean-spirited asshat who steals from the poor to give huge tax cuts to the rich while enriching every crony in sight is anything like Christ.

Oh, and I'm going to suggest that they put down the kool-aid first. They wouldn't want to get the pages sticky.
Posted by four legs good at 11:45 PM 10 comments: 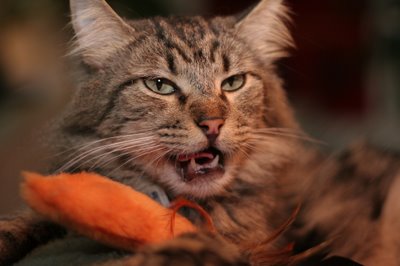 "Sheesh. Leaving me alone all day with a freaking peep and an alien carrot."

Someone was a little testy when I got home.
Posted by four legs good at 9:40 PM 3 comments:

CNN is reporting that a deputy press secretary at Home Land Security (god, but I fucking HATE THAT NAME) has been arrested for soliciting internet sex with an underage girl (who was actually an undercover cop).


Let's see, a republican appointee gets in trouble for being a pervert. And apparently doing it from his office. Why am I not surprised?
Posted by four legs good at 9:19 PM 2 comments: 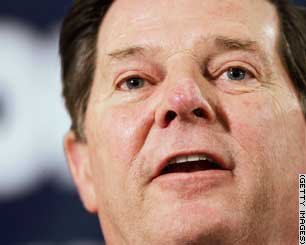 There is not a prison sentence long enough to make him pay for all the damage he's done to the country.

TIME has more. Exclusive: Tom DeLay Says He Will Give Up His Seat.

This quote from the article has been bothering me all night:

"I said a little prayer before I actually did the fingerprint thing, and the picture," he said. "My prayer was basically: 'Let people see Christ through me. And let me smile.'

Because there's nothing like a corrupt, paunchy, ugly as dog-shit-set-on-fire freakazoid congressman to make ya see Christ, eh? 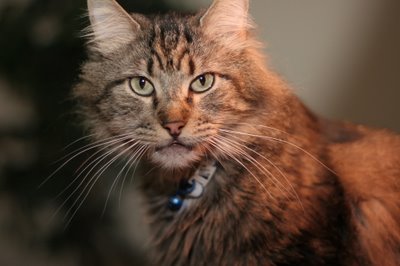 Lion kitty Maxx wants to congratulate his most excellent grannie Echidne of the Snakes for winning a Koufax award for Blog Most Deserving of Wider Recognition.

He caught her a mouse... but then he forgot and ate it. Oh well, it's the thought that counts.
Posted by four legs good at 9:19 PM 5 comments:

If republicans are WATBs (whiny-ass titty babies), and they surely are, then what are mainstream, inside-the-beltway democrats?

Democrats are running away from censure and impeachment like terrified little girls confronted with a big ass snake. "Voters might get mad as us!" they howl. "Karl might use it against us!"

Either stand up or get the fuck out of the way.
Posted by four legs good at 12:31 AM 5 comments: 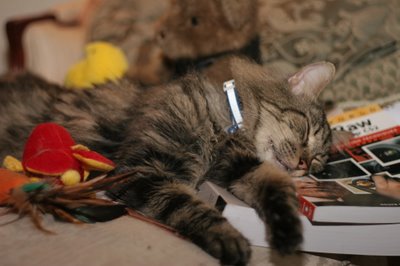 Lion kitty doing what he does best- napping with his toys. (Doesn't it look like he fell asleep while studying? hee hee)
Posted by four legs good at 10:08 PM 10 comments:

First I kill the carrot... 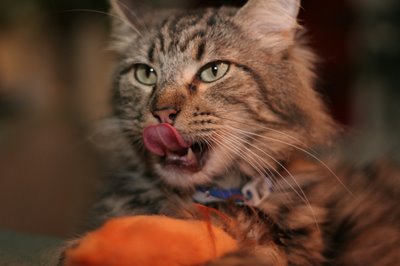