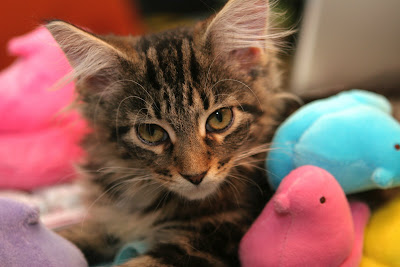 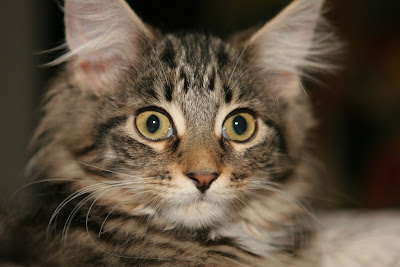 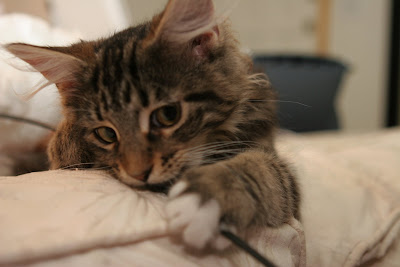 It's pretty clear she's not going to have Maxx's dignitude.

Update: Bah. Bottom photo is a little bit soft. Might replace it with something else.
Posted by four legs good at 10:08 PM 14 comments: 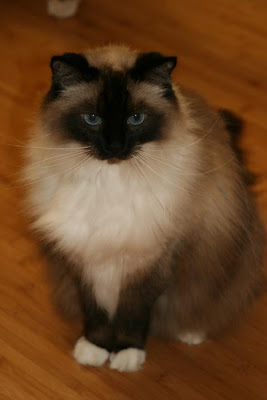 Ian is teh handsome. So I had to steal his photo to post. He lives with ::matthew.
Posted by four legs good at 10:02 PM 52 comments: 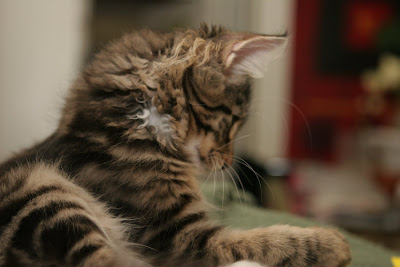 Easter is coming and the peeps are getting restless. 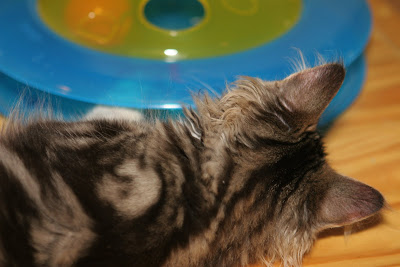 I took this photo to show her very silly ear ruffles. I've never seen anything quite like them on a kitty. (on display in photo above too) Click on the images to see the fluffy details.
Posted by four legs good at 3:33 PM 12 comments: 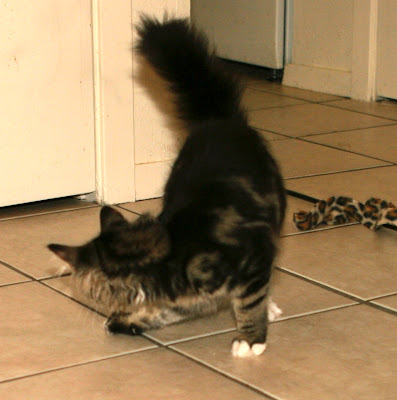 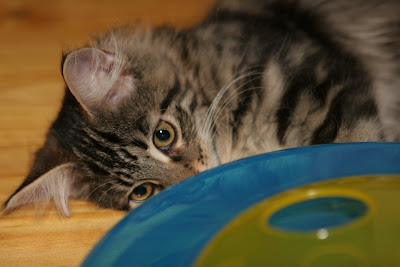 I went strolling through my photo albums to look at Maxx pictures, and they made me so sad. I got so accustomed to seeing him that I got completely used to seeing his tumor. With the distance of a couple months, the evidence of his illness really jumps out at me. Poor little buddy. He was so brave.

I pulled a photo from a few months back, before his mouf got so bad. As always, he is missed everyday.
Posted by four legs good at 12:46 PM 6 comments: 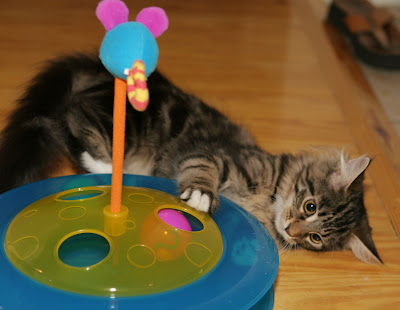 This cheese chase makes me crazy!! 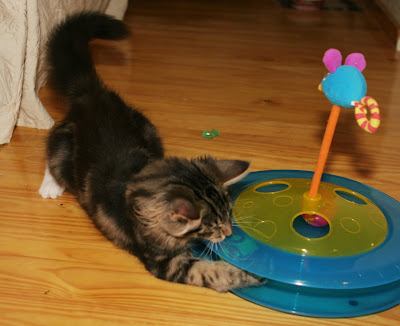 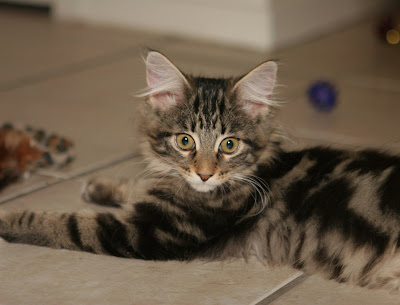 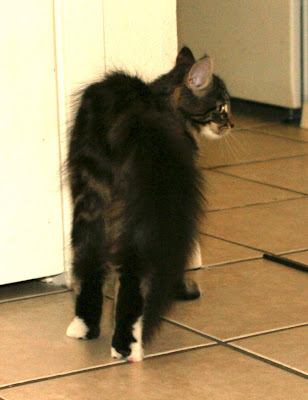 Not a very good photo, she was crab walking and I was trying to catch it. Unpossible!! I like the funny black splotches on the backs of her hind legs. Teh silly. 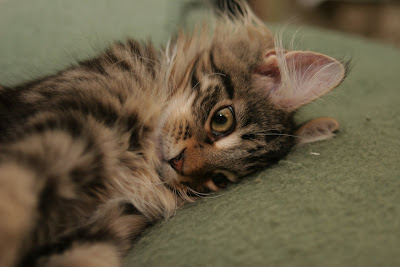 And here she's just being silly. Kittens enjoy that.

Oh, and large photos are back! Click on the bottom photo for all the hilarious details. (not on the top one, just a bunch of distortion)
Posted by four legs good at 4:59 PM 9 comments: 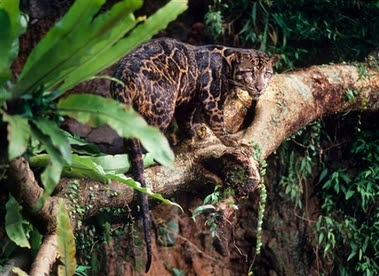 The clouded leopard of Borneo has been proved to be a separate species. Cool!! New Leopard Species Found in Borneo:

KUALA LUMPUR, Malaysia - The clouded leopard of Borneo — discovered to be an entirely new species — is the latest in a growing list of animals and plants unique to the Southeast Asian country's rainforest and underscores the need to preserve the area, conservationists said Thursday.

Genetic tests by researchers at the U.S. National Cancer Institute revealed that the clouded leopard of Borneo and Sumatra islands is a unique cat species and not the same one found in mainland Southeast Asia as long believed, said a statement by WWF, the global conservation organization.

"Who said a leopard can never change its spots? For over a hundred years we have been looking at this animal and never realized it was unique," said Stuart Chapman, WWF International Coordinator of the Heart of Borneo program, which is dedicated to preserving the flora and fauna in the deep jungles on Borneo.

The huntress. It's probably a good thing for the birds that she's going to be an inside cat.
Posted by four legs good at 12:32 PM 1 comment:

If you are clicking on the photos and thinking the file sizes aren't very big, you would be right. Blogger is having a photo upload problem.

I must admit that my fascination with the auroras dates back to early childhood viewing of Rudolph the Rednose Reindeer.

Ahem. Never the less, it's one phenomenon I'd like to see, and photograph, with my own eyes.
Posted by four legs good at 2:32 PM 5 comments:

She's figured out what to do with the peep.
Posted by four legs good at 11:14 AM 4 comments:

What is the deal with these peeps?

She spends everyday getting cuter.
Posted by four legs good at 9:48 PM 7 comments: 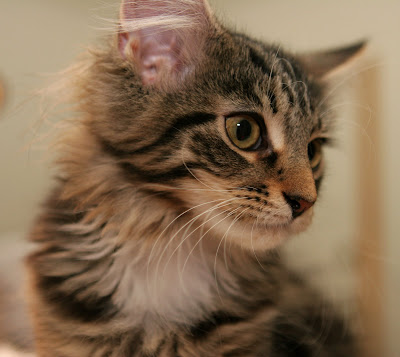 Her whiskers go every which way.
Posted by four legs good at 11:23 AM 6 comments: 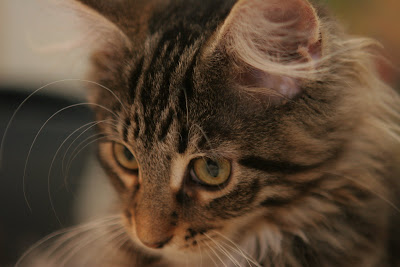 We hope to return to normal blogging tomorrow.
Posted by four legs good at 10:34 PM 5 comments: 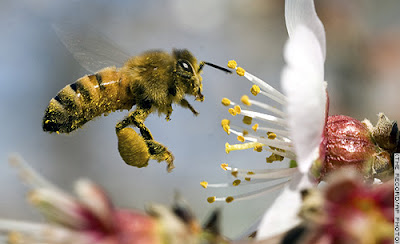 At last, a strong enough signal to upload a picture.
Posted by four legs good at 10:24 PM 1 comment:

Something dreadful has happened to my cable and my high speed internet access. No new Maddie pics until tomorrow as a result.

Right now, with the kind permission of my neighbor, I'm using her WIFI. Sadly though, the signal is weak and slow.

Check out the archives in the meantime.
Posted by four legs good at 8:17 PM 3 comments: 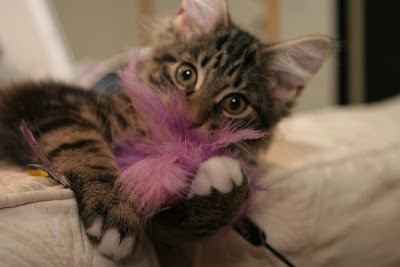 She loves her toys.
Posted by four legs good at 9:55 AM 4 comments:

By request, the other video of Madeleine fetching: 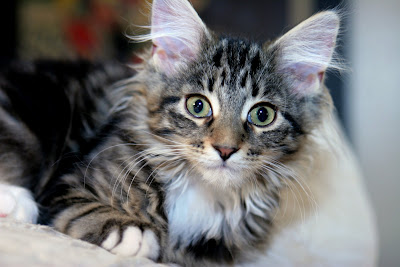 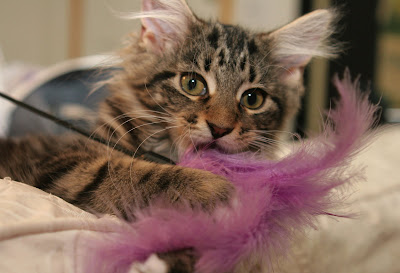 We're having a lazy Sunday here. It's rainy and chilly.
Posted by four legs good at 5:11 PM 9 comments:

The NYTimes is on the right track with this editorial- The Failed Attorney General:

During the hearing on his nomination as attorney general, Alberto Gonzales said he understood the difference between the job he held — President Bush’s in-house lawyer — and the job he wanted, which was to represent all Americans as their chief law enforcement officer and a key defender of the Constitution. Two years later, it is obvious Mr. Gonzales does not have a clue about the difference.

He has never stopped being consigliere to Mr. Bush’s imperial presidency. If anyone, outside Mr. Bush’s rapidly shrinking circle of enablers, still had doubts about that, the events of last week should have erased them.

I have to beg to differ though.

I do not believe there is a single republican in high office left who can be trusted to put principle above party interest. Not a one. I'd love to see Abu get the hook, but I don't believe we'll get anyone much better. If they are a bush loyalist, and they will be, they'll be just as bad.
Posted by four legs good at 1:33 PM 1 comment: