Okay, please leave your suggestions for kitten names in comments. I won't actually name her until I get her home and see what she's like and see what fits, but I'm sure you guys can come up with some great ideas.
Posted by four legs good at 1:06 PM 70 comments: 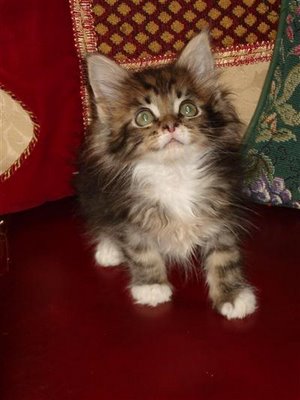 Could this be my new kitten? She lives in Ft. Worth and will be ready to come live with me the second week in January.

Second update: I've pretty much made up my mind. I'm in love with her. I'm calling the breeder back and telling her I want her. 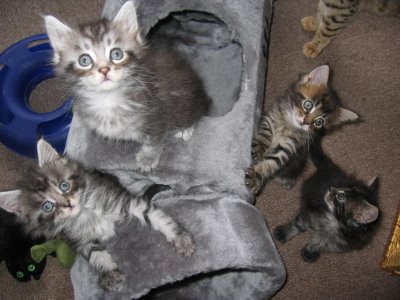 Oh dear. I insist that you click on the photo in order to get the full effect. Note especially the expression of the little guy on the right. 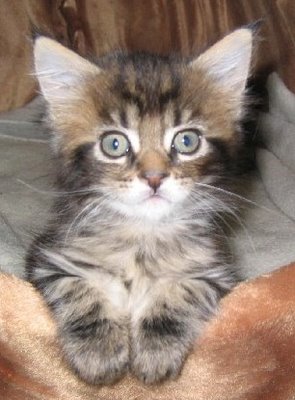 Since I don't have a kitty of my own, I am reduced to trolling the intertubes for random kitties. I guess that makes me a kittenzophile.

This little guy was found on a german web site.
Posted by four legs good at 4:14 PM 2 comments: 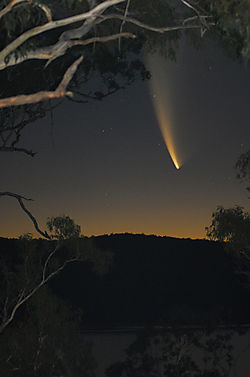 The Comet Maxx over Wallagoot Lake, NSW Far South Coast, Australia. He sure is putting on a show, no?

Many thanks to Barry in Alaska for pointing out the congruence of Maxx's passing and the comet's arrival. It's been a great comfort to me.

I have to admit that I'm having a lot of trouble adjusting to Maxx's loss. I thank all of you for your kind wishes and messages. You've made a very painful time for me a little more bearable.
Posted by four legs good at 11:04 AM 9 comments: 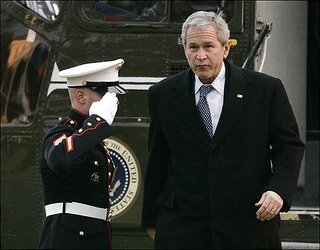 Chimpy says he's still the "decider" on troop levels and all things clusterfucked:

President Bush today rebuffed congressional opponents who want to stop his plan to increase U.S. troop strength in Iraq, declaring that "I'm the decision-maker" on the war effort and challenging skeptics to produce their own plan for success.

Well, fuck-a-doodle-doo. Fine Mr. Bush, go ahead and remind the world that you own this war.

I'm all for letting him hang the stinking carcass around his party's neck, though I have to say that the arrogance still astonishes me. He's been wrong about everything. Everything. And yet he still thinks he knows better than the rest of us. Unbelievable. 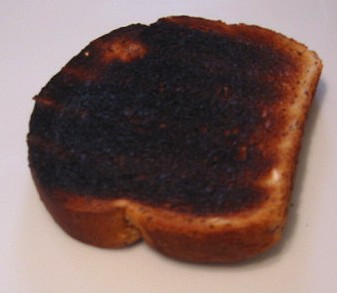 Dana Milbank isn't sure whether Scooter Libby has been hurt of helped by this testimony at his trial this week, but I have no doubt that he's toast.

Cathie Martin, the former Cheney communications officer, has been on the stand, and what she's had to say has pretty much buried both Scooter and his master Cheney (link: Ex-Aide Says Cheney Led Rebuttal Effort):

Vice President Cheney personally orchestrated his office's 2003 efforts to rebut allegations that the administration used flawed intelligence to justify the war in Iraq and discredit a critic who Cheney believed was making him look foolish, according to testimony and evidence yesterday in the criminal trial of his former chief of staff.

Cheney dictated talking points for a White House briefing in the midst of the controversy that summer, his former press aide, Cathie Martin, testified, stressing that the CIA never told Cheney that a CIA-sponsored mission had found no real evidence that Iraq was trying to buy nuclear materials in Africa.

Aboard Air Force Two, on a trip back from the launch of a warship in Norfolk, Cheney instructed his chief of staff, I. Lewis "Scooter" Libby, about responding to a Time magazine reporter who questioned how the faulty intelligence on Iraq had become one of the Bush administration's central arguments for going to war.

In the dramatic replay of events that summer that unfolded yesterday in Libby's federal court trial, Cheney was portrayed as a general on a political battlefield -- enmeshed in tactics, but also deputizing his chief of staff to handle the dirty job of persuading journalists that the war critic was all wrong.

This is completely at odds with the defense theory that Libby was just too busy to remember all the nasty little details. They'll try to get out of it by trying to discredit the prosecution's witnesses, but it's not going to work.

Milbanks column has lots of juicy details on the inner workings of the Cheney spinning machine, including the juicy morsel that Cheney saw Timmeh "Punkinhaid" Russert as a safe stooge.

Memo to Tim Russert: Dick Cheney thinks he controls you.

This delicious morsel about the "Meet the Press" host and the vice president was part of the extensive dish Cathie Martin served up yesterday when the former Cheney communications director took the stand in the perjury trial of former Cheney chief of staff I. Lewis "Scooter" Libby.

Option 1: "MTP-VP," she wrote, then listed the pros and cons of a vice presidential appearance on the Sunday show. Under "pro," she wrote: "control message."

Ouch. Punkinhaid has been pwned.

For blow by blow liveblogging of the trial, visit Firedoglake, which has been the go-to site for all things Plamegate since dust.
Posted by four legs good at 10:34 AM 1 comment:

Comet Maxx over the Rockie Mountains 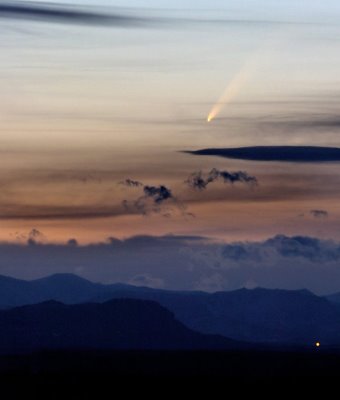 Via our friends at Space.com.

Every year, National Geographic Traveler hosts a photo contest for both amateurs and professionals. The a photo gallery of winning photos can be seen here: 2006 World in Focus Contest. A couple of my favorites are below: 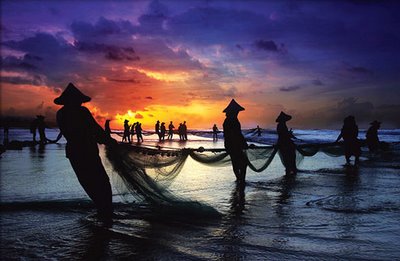 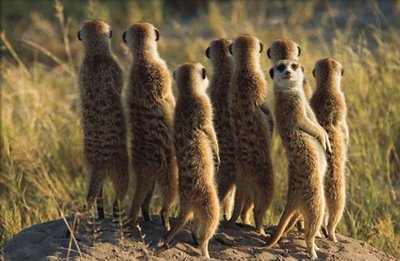 I meant to enter last year, but my schedule kept me from travelling. Maybe this year.
Posted by four legs good at 12:23 PM 7 comments: 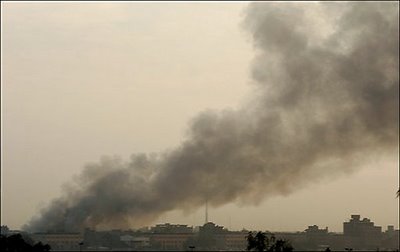 How would you like to see this scene out your window everyday? This morning, more car bombs went off in Baghdad, killing at least 24 people. WAPO: Car Bombs Kill at Least 24 in Baghdad:

And yet, Dead Eye Dick tells us that things are just peachy there, if only we, and the press, would pay proper attention.

Vice President Cheney said yesterday that the administration has achieved "enormous successes" in Iraq but complained that critics and the media "are so eager to write off this effort or declare it a failure" that they are undermining U.S. troops in a war zone...

Let me invite our radioactive Veep to blow me. Again. And then to go fuck himself.
Posted by four legs good at 12:03 PM No comments: 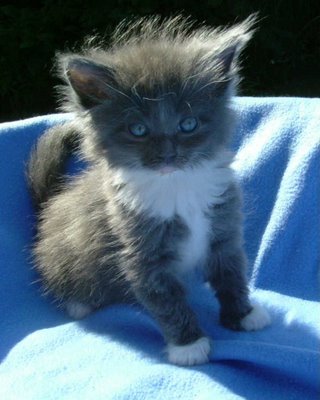 Believe it or not, maine coon kitties are hugely popular all over the world.

I found this little guy on the website of a German breeder.
Posted by four legs good at 9:42 PM 10 comments: 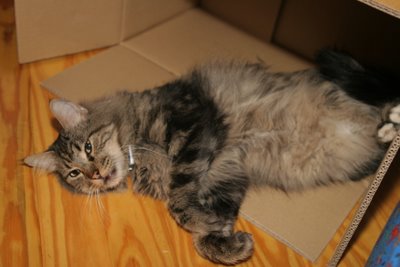 Very sad day today. I picked up Maxx's ashes at the vet.

He seems very far away, up there on his comet.
Posted by four legs good at 9:29 PM 12 comments: 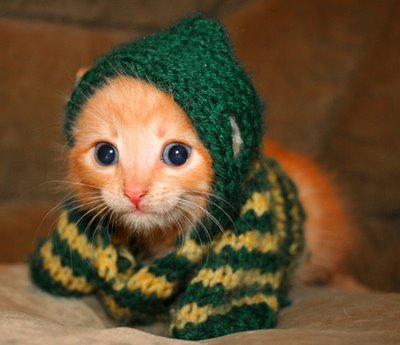 Pretty Photo of the Day 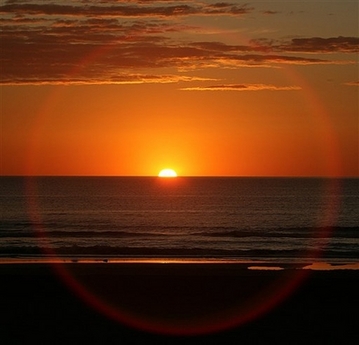 The sun setting over the Pacific Ocean, near San Diego.
Posted by four legs good at 3:01 PM 1 comment:

We'll Show You the Way 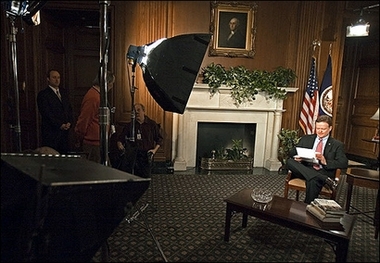 From Jonathan Alter on Hardblogger:

Something unprecedented happened tonight, beyond the doorkeeper announcing, “Madame Speaker.” For the first time ever, the response to the State of the Union overshadowed the president’s big speech. Virginia Sen. James Webb, in office only three weeks, managed to convey a muscular liberalism-with personal touches-that left President Bush’s ordinary address in the dust. In the past, the Democratic response has been anemic—remember Washington State Governor Gary Locke? This time it pointed the way to a revival for national Democrats.

Webb was given a speech to read by the Democratic leadership. He threw it out and wrote his own.(my emphasis added)

I think Alter gets it exactly right. Not only was Webb's response substantive and clear, his tone was perfect. It was nice to hear a democrat sound confident, smart, and unapologetic.

I shudder to think what the speech he was given looked like. Maybe, just maybe, the leadership will learn something from this.
Posted by four legs good at 2:45 PM 4 comments: 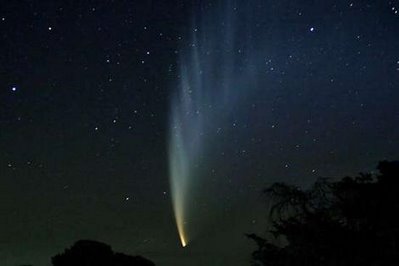 The Comet Maxx over the Brisbane Ranges in Victoria, Australia.
Posted by four legs good at 11:44 PM 8 comments:

Until they learn some manners, I hereby decree that the 'republican' party, shall henceforth be known as the "republic" party.

Update: if you wonder why I'm decreeing things, it's because I am king of the forest. (If you've seen Harry Potter, you would know that.)
Posted by four legs good at 10:29 PM 6 comments:

If chimpy would like some cooperation, maybe he could learn to say "democratic." 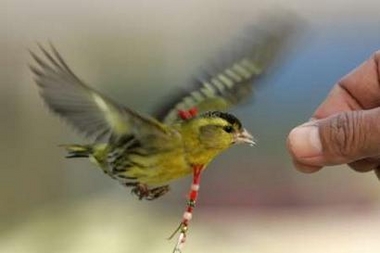 Just because I can't stand to look at that photo of chimpy kissing droopy any longer.
Posted by four legs good at 6:41 PM 5 comments: 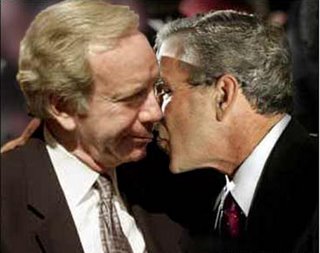 Dear Senator Droopy, we understand that you really enjoy sucking Bush cock, but do you have to do it in public? On C-span, no less?

Sheesh, won't you think of the children?
Posted by four legs good at 12:07 PM 2 comments: 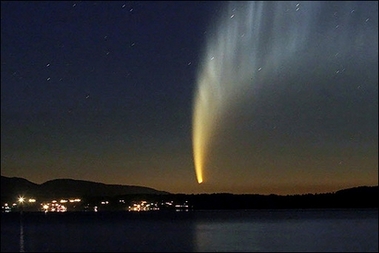 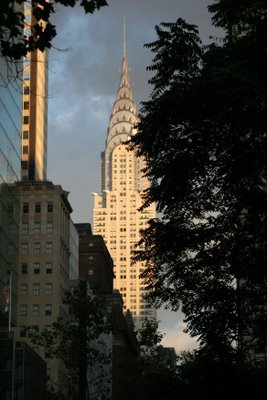 Eli's been photoblogging from his last New York trip so I will too.

This is a not so great shot of the Empire State Building. Photographed in late September, 2006.

Update: I'm reminded that that is actually the Chrystler Building. Yep, I didn't live in NYC for 15 years or anything. Oy.
Posted by four legs good at 4:44 PM 5 comments: 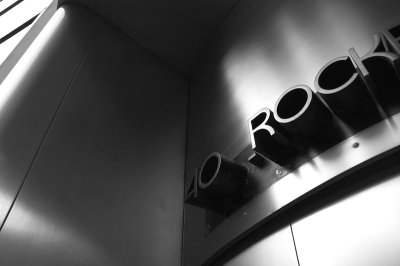 Go vist Eli at his new digs at: MultiMedium.net. He has a bright, shiny new site with lots of cool pictures and everything.

And update your blogrolls!!

Eli's groovy new site was designed by ::matthew at ThacherMathias.com

(Photo shameless stolen from Eli's photo gallery, but all in the interests of promoting his site, so I'm sure he won't mind.)
Posted by four legs good at 10:30 PM 3 comments: 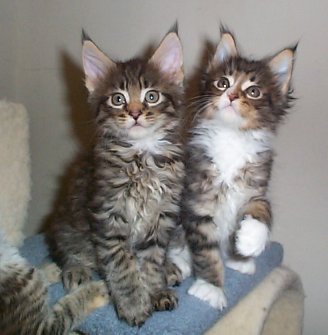 I went to look at some rescue kitties today. Honestly, I'm just not ready for another cat.

When I am, I'll probably get a couple of little guys, like the ones in the photo.
Posted by four legs good at 8:56 PM 17 comments: 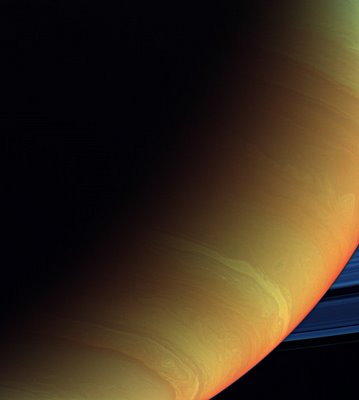 From our friends at Space.com, a spectacular image of Saturn.

Saturn gets a new look in this new image taken by the Cassini spacecraft studying the ringed planet.

The vivid orange and yellow hues of Saturn’s atmosphere, and the blue tinge of its rings at far right, highlight this composite of several images taken by Cassini’s wide-angle camera. To build this view, researchers used special camera filters that are sensitive only to certain types of infrared light.

I never get tired of the marvels of our solar system.
Posted by four legs good at 2:15 AM 4 comments: